After considerable outcry, a Montauk eatery has decided to forgo its "No Irish Drunks" ban. In an attempt to make amends, the Dock Bar & Grill put a piece of paper over "Irish" so the sign now reads "No Sensitive Drunks" allowed.

Pauline Turley, vice chair of the board of the Irish Arts Center, noticed the sign and expressed her dismay to IrishCentral. Turley, who originally hails from Ireland, said, "I was taken aback by the way that kind of stereotype was so blatantly displayed. ’No Irish Drunks,’ that’s very pointed." Remember the lesson former Mayor Bloomberg learned when he mentioned the "inebriated Irish" during the St. Patrick's Day Parade.

However, IrishCentral reports that owner "George Watson, a former NYC police officer, fireman, and Marine who served in Vietnam," had his reasons:

“There’s a large Irish contingent out here and once they attacked me - verbally - so we added ‘No Irish Drunks’ to the list,” he said during a phone call.

Many in the Montauk community are Irish American, and the beach town is also a popular destination for Irish students working for the summer on the J-1 visa. Watson told IrishCentral that he is of Irish descent, “and also a drunk at times.” He was the Grand Marshal of the Montauk St. Patrick’s Day Parade in 2003.

A portion of his bio on The Dock's website reads "At The Dock, we feel that in order for a joke to be funny, it must be told at someone’s expense. We tell ethnic, sexist, and racial jokes - everyone gets their turn in the barrel."

"If you spoke about any other religion or race they would probably take offense to it, but the Irish have a sense of humor,” Watson said.

Still, they changed the sign! No stranger to controversy, in 2006 Watson explained why he asks patrons to take their screaming children outside: "I think it’s extremely rude [to keep the kids inside the restaurant]. It’s rude to everybody around here. What about the people that came in and hired a babysitter so they could go out and enjoy themselves? And you’re going to sit them down next to a screaming kid? I don’t think so." 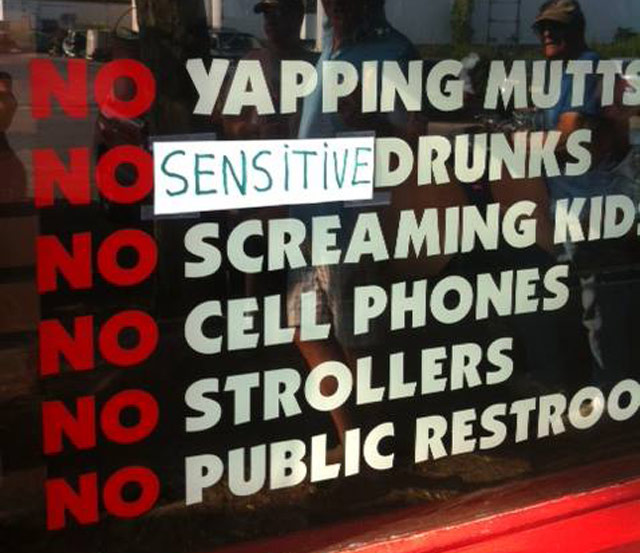 Anyway, the "No Irish Drunks" sign means there's one less thing for Watson to do: 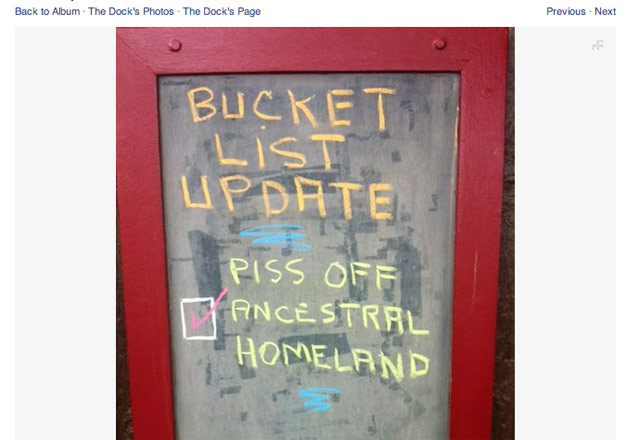 #bar
#Montauk
#No irish Drunks
#No Sensitive Drunks
#The Dock
Do you know the scoop? Comment below or Send us a Tip