Our latest installment of Quick Bites brings us to a former bodega for some quality chicken.

THE VIBE
In some ways, MoMo Chicken Shack feels like the quintessential "Jefftown" restaurant. Opened this summer from the crew behind MoMo Sushi Shack, the popular, reliably decent spot that opened back in 2010, MoMo Chicken serves up a bird-heavy menu out of a one-time bodega in the party zone around the Jefferson L train stop.

The design is what you might call "unfinished," a look so prevalent in these parts, with torn-up tile flooring presumably left over since its bodega days, raw brick walls, and beat-up metal orange chairs. The exterior, sitting right atop the subway entrance, is equally scruffy, with minimal signage.

But MoMo Chicken Shack is a professionally-run operation, and your server is affable and eager to help. This is a full-service restaurant with seating for about 30, at various wooden tables and stools. 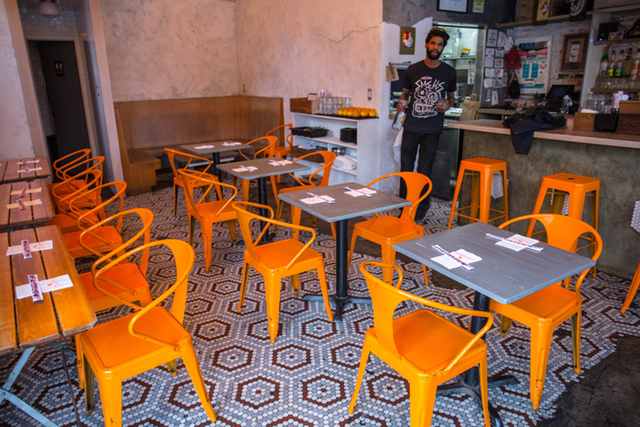 THE BITES
MoMo Chicken Shack recently expanded their menu, but the core remains fried bird bits in a variety of formats. The best thing I ate here last weekend was the Karaage plate, with big chunks of buttermilk-marinated thigh meat fried up Japanese-style—crisp on the outside, juicy within, served with a trio of sauces. These three—a zippy house hot sauce, a tart ponzu, and a listless tofu ranch—are part the menu's extensive Dipping Sauce section, which can be a red flag, but in the case of the Karaage served as able complements rather than cover-ups.

You can choose from among four types of wings, including a six-pack seasoned with Togarashi. These look like standard bar Buffalos but the flavor is a bit more complex—more like physical red chili peppers, rather than just "heat"—and they aren't nearly as spicy as my server warned. Your order comes with more of that tofu ranch sauce, which really is nowhere near as satisfying as just regular ranch, and since the dish is already miles from being vegan, it seems like an unnecessary sacrifice.

Over in Small Plates territory the Kurobuta Sausages were nicely chewy and blistered, the sweet, smoky pig served on a bed of sweet grilled cabbage and honey mustard. This was a little too sweet, I thought. The small bowl of Kimchee, however, had a terrific fiery bite to it, and proved especially valuable as a mix-in with the well-textured but slightly bland Shishito Mac & Cheese.

THE VERDICT
MoMo Chicken Shack, like its sushi-slinging elder sibling, is a solid choice as part of a night on the town, either before, during, or after whatever revelry you have cooked up.

MoMo Chicken Shack is located at 247 Starr Street, at the corner of Wyckoff Avenue, and is open daily from 11 a.m. to 11 p.m. There's no website and they don't answer their phone, but here's their Insta page if that's any help.

#bushwick
#jefftown
#momo chicken shack
#quick bites
#original
Do you know the scoop? Comment below or Send us a Tip