As Smorgasburg continues to grow each year, it's tough keeping up with all of the new vendors, especially when you're in the thick of the crowd that forms each Saturday in Williamsburg. That's what makes the perky white flag atop newcomer Mofon·GO's stand so convenient for navigating the crush when you can barely see a few feet in front of you. We missed their debut earlier this summer but rectified that oversight over the weekend, stopping by to sample the hearty and comforting Puerto Rican fare they're serving.

While one can be overwhelmed by choice at Smorgasburg, the same won't be true here. Owner Manolo Lopez, a Puerto Rican native who moved to NYC three years ago, keeps it simple, offering mofongo topped with a choice of either a chicken or vegetable stew-like filling. For the uninitiated, Lopez describes mofongo as the "unofficial national dish from Puerto Rico, it's comfort food." Green plantains are fried, then smashed with garlic into a chunky paste, then topped with a savory stew of meats, fish or vegetables.

Lopez credits his first harsh winters in NYC as inspiration for choosing mofongo to start his business. "The recipe is my moms! I give her all the credit and make sure everyone knows," Lopez told us. "When I launched the business I flew her from Puerto Rico for a month and a half just to make sure I was making justice to her recipe. Cooking mofongo for 10 - 20 is not the same as cooking for 500 - 700, trial and error taught us a lot, but she was definitely the heart and soul and part of the inspiration behind this business."

The effort has clearly paid off. On their first day at Smorgasburg, the crew—which originally consisted of Lopez and the neighbors and friends he dubbed "The Gringos"—sold out of product by 4 p.m. after serving over 300 orders. There was a line already forming around noon during our visit, which Lopez said would only get more intense as the day wore on. Waits are rewarded with garlicky, rib-sticking plantains that retain their texture even after sitting in the stew, which boasts bright tomato flavor and enough heat to wake you up without setting your mouth on fire. It's also a huge portion, enough to feed two in desperate need of sustenance.

There are mostly "newbies" lining up for the dish, Lopez says, and he often finds himself explaining what he's selling. "On the other hand, the reaction I get from Latin people is amazing, smiles and compliments that make me feel that I'm on the right path," Lopez tells us. "Our branding is very different from what they are used to seeing at mom and pop shops; they see a Puerto Rican vendor at Smorgasburg and take that as a win for our culture. We're the only Puerto Rican vendor out of 100."

For this season, the crew is sticking to chicken (think extremely tender chunks) and vegetable toppings, with the option to top either with freshly chopped cilantro and a very non-vegetarian piece of pork crackling. After they recover from a hectic first season, Mofon·GO plans to expand their toppings options to include things like Shrimp Mofongo, Ceviche Mofongo and a mushroom and red wine reduction with skirt steak, among over a dozen other permutations. For now, find them at Smorgasburg in Williamsburg on Saturdays and Brooklyn Bridge Park on Sundays or perhaps popping up at a music festival around town. 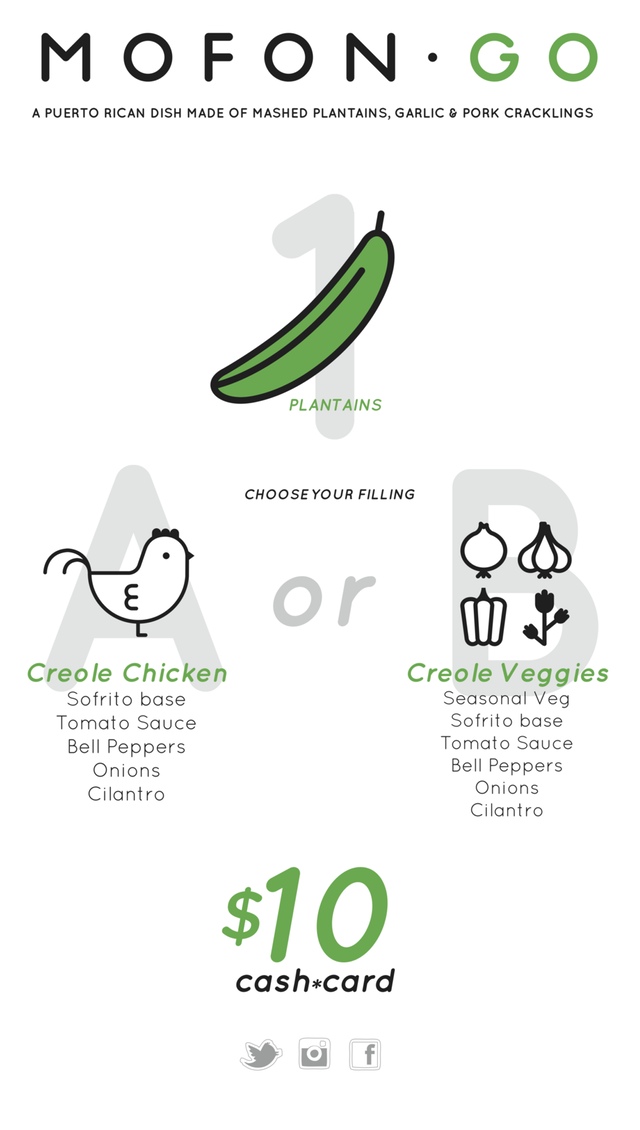 #green plantains
#Manolo Lopez
#mofongo
#puerto rico
#smorgasburg
#original
Do you know the scoop? Comment below or Send us a Tip