A midtown street ran clear with vodka yesterday when several large bottles were dumped out as part of a synergistic protest-publicity stunt targeting Russian President Vladimir Putin's "gay propaganda" law. The law imposes fines and deportation on anyone found supporting LGBT culture in any way and prohibits gay parents from adopting Russian children.

Organized by the United Restaurant and Tavern Owners Association of New York (URTO), an alliance of over 3,000 hotels, night clubs, bars and restaurants in New York, the vodka pour was held as part of a larger boycott against Russian liquors. Oddly enough, the largest bottle poured was Stolichnaya, which is not actually a Russian vodka.

Pouring Out Vodka For Protest Marketing Synergy from Gothamist on Vimeo.

"We are encouraging every member of our restaurant association to get involved, as well as New Yorkers gay or straight to get involved," said Paul Hurley, president of the URTO and owner of Desmond's Steakhouse, where the pour was held. Hurley says that at least 200 bars and restaurants are already participating in the boycott. 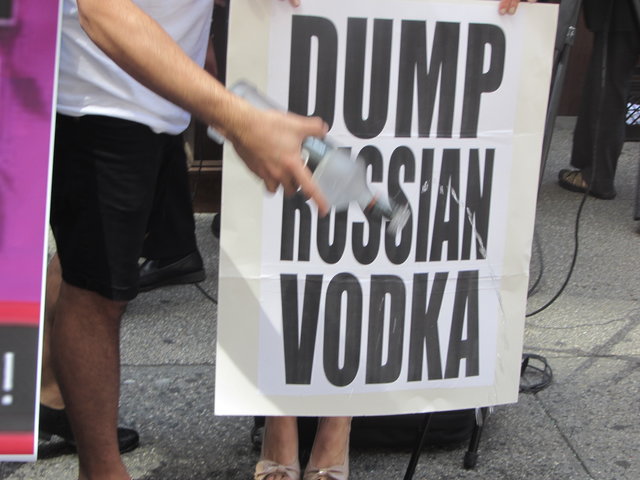 Of course no vodka event would be complete without a few ladies in high heels and short skirts, so the URTO members were joined by a handful of "models" donning Georgi vodka anti-Putin pro LGBT t-shirts.

When asked about the role American vodka distributors were playing in the boycott, Hurley insisted that Georgi merely provided the shirts for the event, but encouraged us all to "try out" American vodkas instead of Russian. 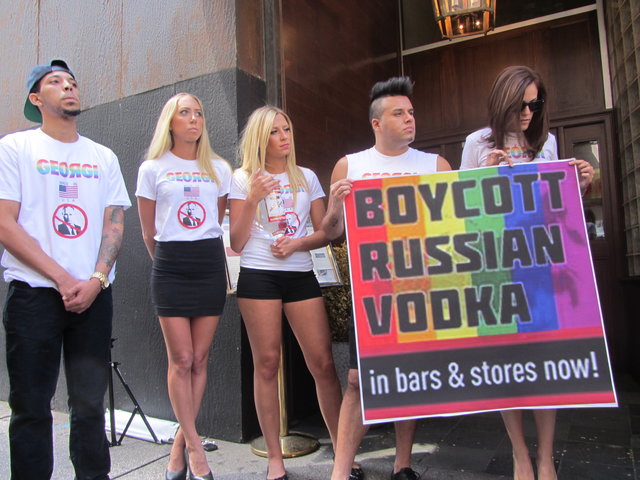 Johnny Donovan, founder of J Donovan Productions and ringleader of the Georgi models, followed up by saying that Georgi was just an "American brand saying no to the Russian brand."

As of now the URTO is only pushing for a ban on Russian vodkas, not other Russian products they may use in their establishments. "It has to start somewhere," said Yelena Goltsman, Founder and Co-President of RUSA LGBT, a Russian-Speaking American LGBT Group.

When it came time to pour Hurley was the first to unscrew his top and tip his bottle into the gutter. "This one's for Putin," he said.

#advertising
#lgbt
#marketing
#protest
#russia
#viral marketing
#original
Do you know the scoop? Comment below or Send us a Tip