Mobb Deep's Prodigy On The Cookbook He Wrote For The Incarcerated

Albert Johnson, a.k.a. Prodigy, author and half of the legendary Queens hip hop duo Mobb Deep, is worried about security at the ramen pop up shop where we're meeting to discuss his new book, a cookbook for prisoners.

Johnson is sitting in the passenger's seat of his publicist's double-parked SUV on 40th Avenue in Queens, which separates Keizo Shimamoto's new Ramen Shack from the Queensbridge Houses, where Johnson grew up and where he lived with fellow Mobb Deep member Kejuan "Havoc" Muchita while recording their masterpiece, 1995's The Infamous. I chose Ramen Shack because Shimamoto is a big Mobb Deep fan—he serves a Ramen dish named "Quiet Storm" after the group's 1999 hit—and well, because there's a lot of ramen in Johnson's recipes.

"We didn't realize it was this close to the projects," his publicist says from the driver's seat. The rain is falling in sheets. "We don't usually come here."

Johnson and the publicist want the Ramen Shack, which only seats 10 or so, to lock its doors while we do the interview. Johnson, who is wearing a blue Nike baseball hat, baggy jeans and a vintage Polo jacket over a gray hoodie, is still a big deal around here.

"I don't like people knowing where I'm at," he said later, after Shimamoto gamely agreed to an hour long shutdown (it was the slow part of the afternoon). "I got a lot of jealous people," he said. "I got to move accordingly."

Commissary Kitchen: My Infamous Prison Cookbook grew out of Johnson's experience in state prison, where he served a three-year sentence from 2008-2011 on weapons charges. He spent much of this sentence in the Mid-State Correctional Facility in Marcy, NY, about a four-hour drive from the city, and it was there that he became a cook and an author. While locked up he wrote an autobiography; Slate called the audiobook version "among the most riveting recordings any rapper will release this year, or any year."

He also learned to cook using the spartan supplies and ingredients available to him: a microwave, toaster and toaster oven to do the actual cooking. No knives, so the top of a can (considered a weapon by prison authorities) was used for cutting. For ingredients, lots of ramen and canned fish, and no fresh vegetables. He learned stripped-down and adapted styles of cooking from fellow inmates, most notably a Rastafarian cook serving time for rape and an Italian police chief in for dealing cocaine. Experimenting with recipes and ingredients allowed him to become a kind of prison cooking expert, and he shares this expertise in Commissary Kitchen, which was co-written with journalist Kathy Iandoli and came out last week. The book is a testament to the hip hop ethic: using creativity to create art and assert humanity in the most oppressive circumstances.

"In a world where prisoners are treated like animals, we made our experiences there feel more human by how we prepared our food," Johnson writes in the book's introduction. "It was all we had really—especially on holidays."

He says he still cooks the dishes he learned in prison, especially barbecue salmon, his kids' favorite.

"When I had to go away for three years, I didn't know that cooking was going to be such a big part of my time away," Johnson said. "It got my mind off where I was at for a couple of hours. … You feel like you're doing what you want to do, even though you're stuck in this place." 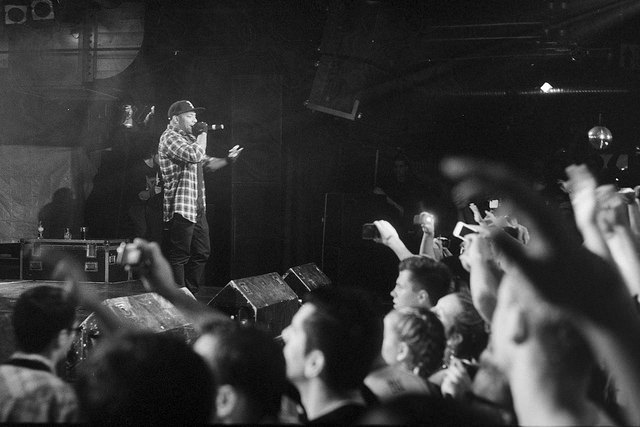 The incarcerated are not a large segment of the book-buying public, and people on the outside will have more than the very limited options that Johnson describes in Commissary Kitchen. But that didn't stop Johnson from joining other entertainers who have tried to capitalize on cooking skills earned from serving time. Brownsville MC Thirstin Howell III has a YouTube cooking series called "Jail Recipes," and last year Prison Ramen , a collection of prison recipes from celebrities, hit bookstores. Johnson pointed out to me that the recipes can be easily adapted by college students, whom he said have similar supplies and ingredients at their disposal as inmates. "They eat like prisoners almost," he said.

Except they can eat whenever they want, and their cafeterias have green vegetables. Johnson suffers from sickle cell anemia, a congenital condition resulting from irregularly shaped red blood cells that can cause chronic fatigue and pain. Doctors recommend that patients with sickle eat a diet high in fresh fruits and vegetables, something that was nearly impossible for Johnson to do in prison. Prison meals were served at 6:30 a.m., 9 a.m., and 4 p.m. (prisoners had to cook if they wanted to eat in the evening) and contained just one green vegetable—spinach—a week, Johnson said.

Prisoners were allowed to receive 30 pounds of food a month from the outside. Johnson claims fresh food and vegetables were not allowed (though current DOC regulations say otherwise), so while other inmates were getting monthly packages of Twinkies and pudding cups, Johnson had his wife send him 30 pounds of canned vegetables each month.

"I got to eat green vegetables every day," Johnson sad. "That's my thing. I got to eat them every day to keep my body strong, to keep from getting sick…I was afraid of dying in there."

Johnson cooked his own food to make sure he ingested as much vegetable nutrients as possible. But it was also a quality control measure, especially since it was often other prisoners preparing and serving the mess hall food.

"All kinds of foul debaucherous shit that these motherfuckers are locked up for. And these people are preparing the food," Johnson said. "So who's to say they aren't spitting in this shit? You know how much shit people find in the food in jail? Like pubic hairs and glass and just foul shit people be doing, because you locked up with a bunch of insane criminals and they are doing serious time."

By drinking nothing but water for three years, working out, laying off snacks, and cooking his own food, Johnson avoided getting sick while incarcerated, something that had happened in his younger years during brief stays in county jail. He reported gaining 35 pounds of muscle as well, and preached the gospel of healthy eating to other inmates. "When they see how good I was eating, they started changing their diet," Johnson said. "They started learning."

"If prison is to reform people—prison is there to try and change people, to help people, that's why they got school programs and church programs—then help them with their diet too," Johnson said. "If people are eating different, they start thinking different."