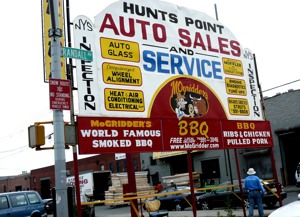 Fresh from attending the Bronx Food and Arts Festival on Sunday, Dave Cook of the highly recommended food site Eating in Translation reports that Hunts Point barbecue rig Mo Gridder’s – famous for its St. Louis cut smoked rib platter served in the parking lot of an auto center – is moving into its very first restaurant space without axles. Owner Fred Donnelly will open Mo Gridder’s II in the Belmont Section of the Bronx, in the space vacated by Roberto restaurant at 632 East 186th Street at Crescent Avenue. Barbecued pulled pork and smoked brisket will soon be just a squishy, sesame seed bun’s throw from Arthur Avenue. Score one more for the Bronx – most of which, at least food-wise, has been down so long that up looks like a pallid Domino's slice.

Mo Gridder’s was closed yesterday and today for its own annual tune-up, so there’s no word yet if the new restaurant space will feature the legendary $34.95 oil change (up to 5 quarts), suspension-steering-brake check, and St. Louis-cut smoked rib platter special on its menu. In the meantime, the original Mo Gridder’s location in Hunts Point has expanded its regular hours (to 7 p.m. Wednesday through Friday) for the summer, and prices haven’t budged since Peter Meehan’s January 2007 review for the Times. During normal hours, Mo Gridder’s even sells bottles of its own vinegary sauce for $5.