What would the former NY Times' Ethicist say about this one? Today The Awl published a piece by "millennial" Brendan O'Connor, who got fired from the Milk Truck food truck after calling a customer out on Twitter for not tipping on a rather large bill. Here's how that went: 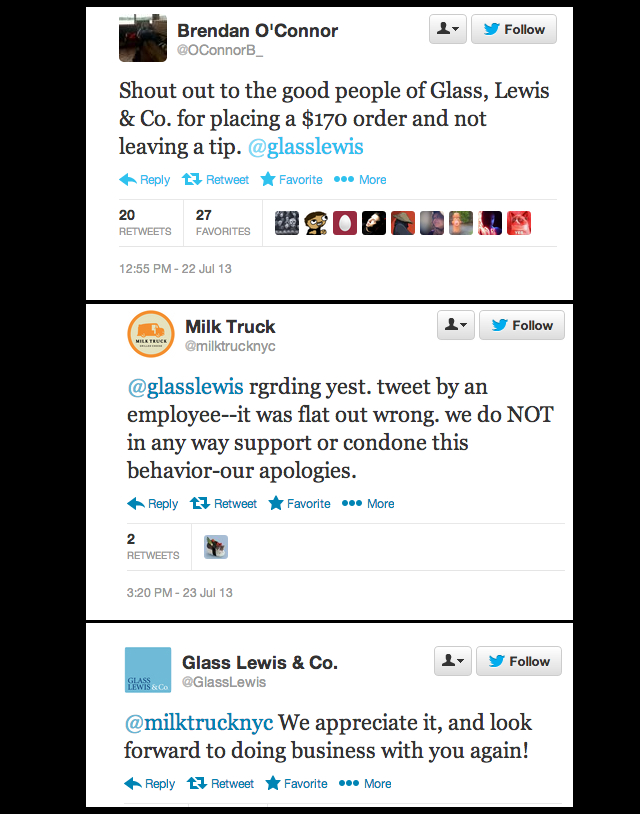 O'Connor claims that Milk Truck owner Keith Klein uses social media to monitor his employees, explaining: "if you enjoyed your sandwich enough to Instagram it, but the color of the grilled bread wasn't exactly right, we’d hear about it." So, last Monday when O'Connor used Twitter to shame the company Glass Lewis for not leaving a tip on a $170 order, Klein took swift action to fire him.

"He told me that he’d gotten a call from the company, Glass, Lewis & Co. The company provides shareholder advisory services. Apparently, those employees were mortified that their lunch truck had tip-shamed them—the home office in San Francisco even got involved. And it was unfortunate but he was going to have to let me go. The company has a way of doing things and he thought I’d understood that. I had embarrassed him and the company and that was that."

Milk Truck then apologized to Glass Lewis over Twitter, and the company accepted that apology. And now that O'Connor has written up the story, both Milk Truck and Glass Lewis are getting embarrassed plenty more by the masses, who are publicly shaming them all over Twitter, and calling for boycotts of the grilled cheese truck—there are about 10 Tweets coming in per second!

We've reached out to Glass Lewis and Milk Truck (who picked up and hung up the phone immediately when we called), and will update if we hear back.

Anyway, if you're looking for a great grilled cheese served up out of a truck in NYC, check out Morris Truck.

UPDATE: The 666Burger food truck just got in on the action! Let's settle this with a demolition derby!

@milktrucknyc You are douches. Fuck you. I'm also @666burger. If we meet on the street there will be trouble. Trust. http://t.co/taR2HzeZvl

#brendan o'connor
#food truck
#glass lewis
#keith klein
#milk truck
Do you know the scoop? Comment below or Send us a Tip