Mile End deli, the successful local purveyor of Montreal style smoked meat, suffered a heavy blow as result of Hurricane Sandy, which knocked out the deli's production facility on Pier 41 in Red Hook, submerging it under four feet of salt water and sewage. Owner Noah Bernamoff, a Quebecer by birth, tells us the production facility "was without power for three weeks" and left with "four construction containers of spoiled food and equipment." Increased operating costs have forced him to raise prices, and that hasn't gone unnoticed by some of his customers.

Last night a flame war erupted on Mile End's Facebook page, where Bernamoff lashed out a customer who had a problem with her order. The customer in question, Sarah Oster Shasha, wrote on Facebook, "I was really disappointed last week to get a Beauty bagel for takeout, only to have it not be toasted and not be a Montreal bagel. You guys still charged $13 for it...I understand that things are tough with the hurricane, but that's like stealing." It seems the "stealing" analogy triggered something in Bernamoff, who subsequently blasted the customer and others who frequent his Boerum Hill flagship: 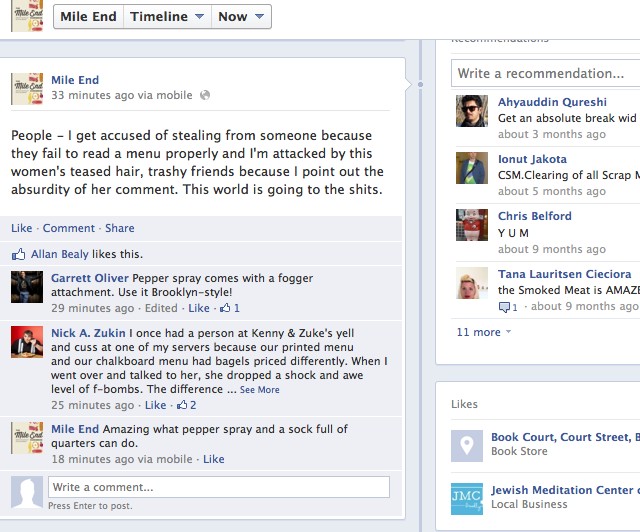 That Facebook post has since been deleted, as has the one at top here, in which Bernamoff berates the "misinformed mob wives" who "think this is some systematic issue of customer service at mile end." We reached out to Bernamoff about the comments, which generated a heated backlash on the Mile End Facebook page. "I don't like being accused of stealing especially at a time when I have had much taken away from me as a result of natural circumstances," Bernamoff tells us. "So I got snarky and told her she should take her business elsewhere. 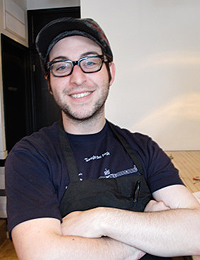 "And now I'm being attacked on facebook by a slew of her 'friends' who have nothing to do with this petty argument but somehow feel a right to say whatever they want, however misinformed they may be. It's just so stupid and such a waste of my time and yet I can't stop stabbing back." Of course, getting stabby with "mob wives" in this part of Brooklyn is never a good idea and Bernanoff has since folded up the rhetorical switchblade. The Mile End Facebook page now features this apology:

I apologize for having offended a customer who was trying to voice an opinion. The subsequent use of unprofessional language to fend off her army of facebook friends was clearly not in my best interest. Mile End has always been a very chill place with a staff that works hard to please its customers as most of you who have visited can attest.

This past month has pushed and prodded the emotions o
f everyone at Mile End in ways that, unfortunately, too many of us can now truly understand. The business faces new challenges; the way we address them will define who we are and what we hope to be.

I have always welcomed constructive criticism -- When constructive qualities are traded for mere snark, however, the line between what's personal and what's suggestive can be blurred. That said, I recognize that I crossed those same lines in response and for that I am sorry, particularly to our customers, fans, and facebook followers.

Now maybe we can all get back to focusing on what's important: the smoked meat, which finally returned to Mile End last week. The Local East Village reports that Noah is brining and smoking the meat at Fleisher's upstate. The smoked meat sandwich now costs $14, up from $12. And don't worry, Bernamoff "isn't putting a gun to anyone’s head" to make them order it.

#facebook
#hurricane sandy
#meat
#mile end
#noah bernamoff
#original
Do you know the scoop? Comment below or Send us a Tip