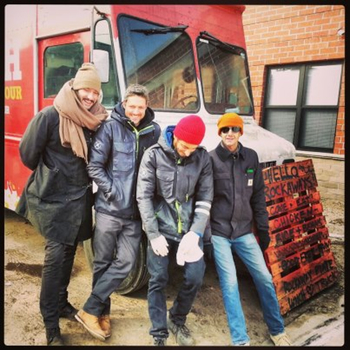 Soon after Hurricane Sandy hit, The Beastie Boys’ Michael Diamond (aka Mike D) started up a food truck called the Rockaway Plate Lunch, and since then he's served up over 19,000 free hot meals along with his restauranteur pal Robert McKinley. In a recent interview with Good, Mike D discussed their efforts:

On the menu: "It's a really hearty meal of chicken, beans, rice and vegetables. A very complete, warm, flavorful meal, and certainly a lot more nutritious and balanced than a fast food option. We were conscious of giving people something that they were familiar with but at the same time was hearty and warm."

On moving forward: "We are still out there on a more reduced schedule, and we’re in talks with a bunch of people to coordinate with the local community, because what we really want to do is transition. There’s still the need for warm food out there, but our real goal for this summer is to help revitalize the local economy. So we’re trying to switch the truck over from giving away food, to charging for food but having it become staffed, run and operated on every level by citizens of the Rockaways. We’ll keep the same restaurants that have been involved, but in a mentoring capacity."

On NYC food: "I’m lucky, I grew up in New York City, so we grew up on the idea that you have different foods from different cultures any night of the week. The only constant was that Sunday night we got Chinese food. That is some New York shit.

You can read the full, food-centric interview here, and below you can see the truck in action:

#food truck
#hurricane sandy
#mike d
#rockaway plate lunch
#rockaways
Do you know the scoop? Comment below or Send us a Tip