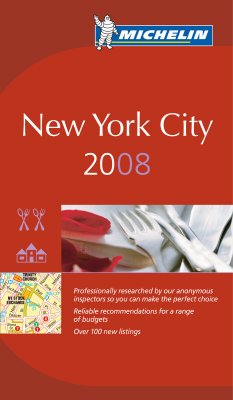 The new edition features 565 restaurants (and 54 Manhattan hotels.) Of the eateries, 42 were awarded stars ranging from one to three; a mere 3 restaurants merited the highest 3-star rating (Jean Georges, Le Bernardin and Per Se), while 6 others made the 2-star cut. But star-gazing aside, the guide comes in handy for diners on a budget. The “Bib Gourmand” category includes 52 restaurants that serve a menu with two dishes and a glass of wine or dessert for $40 or less.

We were initially happy to see that Dressler, our local Williamsburg favorite, make the list, then saddened when it hit us that getting seated for brunch might now be a bit of a bitch. The other big news: Craft, Top Chef chef Tom Colicchio's joint, fell from the heavens as it was stripped of its only star and Picholine gained a star to two-star status.

At 7pm on Thursday the stars will be celebrated during a panel discussion at Borders in the Time Warner Center, which happens to be the home of three-star Per Se, two-star Masa and one-star Cafe Gray. Panelists include Jean-Luc Naret, director of the Michelin Guide; Jay Cheshes, former restaurant critic at Gourmet; and celebrity food-blogger Danyelle Freeman, recently made restaurant critic at New York Daily News.

Savor the full array of stars after the jump.