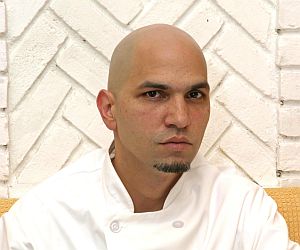 Wildly successful young chef and restaurateur Michael Psilakis – whose Anthos is one of only two Greek restaurants in the world with a Michelin star – refined his talent not in culinary school but in the kitchen beside his Greek mother during his childhood on Long Island. After earning a business degree, he found himself drawn back to the food world, where he worked his way up from waiter to owner of the Long Island restaurant Ecco. His subsequent enterprise with celebrated restaurateur Donatella Arpaia, called Dona, was one of Esquire's Best New Restaurants in 2006, but the place closed when the building housing it was sold to a developer.

Psilakis and Arpaia have now taken some of the concepts behind Dona, which featured Italian cuisine with Greek inflections, and recreated them as Mia Dona, a new restaurant on the Upper East Side with a genial ambiance, sophisticated but unpretentious menu, and reasonable prices. Psilakis spoke with us recently about his journey from TGI Fridays waiter to rock star chef, his forthcoming book, and his plans to bring his haute Greek cuisine full circle to Greece.

So how many restaurants are you involved in now? I have three: Anthos, Kefi and Mia Dona, and we’re opening up a fourth. We’re moving Kefi and opening another one probably around July.

What’s the fourth one? It’s a new restaurant we’ll be opening up in the existing Kefi space.

What’s the cuisine going to be? I don’t know yet; I’m playing around with a bunch of different concepts. It’s a toss-up right now because I don’t know if I want to do something a little more formal or do something like Kefi which is really casual and fun. I’m torn. I like the idea of raw fish but I just don’t know if there’s going to be enough time to prepare for a formal restaurant like that. Mia Dona isn’t super complicated, but there’s a tremendous amount of technical stuff that’s going on in the kitchen that requires a lot of attention.

What are these technical things? Conceptually Mia Dona is the first restaurant I’ve put together in the opposite way I normally do. Usually I write a menu and the concept flows from the menu. This time I formulated a concept before the menu; the concept was to establish an eatery that would be like welcoming someone into your home. And the food kind of revolves around that concept, where it takes recognizable dishes that skew toward Italian that I then tweak a little bit to make them my own.

I also plate them in a way that gives you a very comforting, homey feel. When you see the plates in front of you and they’re not precisely squared, it was meant to be that way to evoke a hominess. When your mom is cooking for you she doesn’t square everything up and make sure it looks exactly presentational.

How do you manage to keep all these restaurants together without your head exploding? [Laughs.] That’s a good question, man. I had a very good year this year. The thing I came into the city to do was to expose people to Greek food and show them that Greek food could really be viewed at the haute level like the Italians and Spanish and French. And thank God I’ve accomplished that at Anthos. And through that I’ve gained a tremendous amount of resources, most importantly human resources. I have a lot of young, very talented chefs who want to learn and be a part of something that’s growing and they’re taking advantage of that opportunity and we’re helping each other grow.

Before you became a chef, you ran the front of the house at your restaurant Ecco. How did you make the transition into the kitchen? It was a forced transition. I had a chef who decided not to show up for work and take a couple cooks he was working with to his own restaurant. I went to the restaurant one day and found myself three cooks short, one of whom was the executive chef. I really had no choice but to jump back there and just do the best I could.

You can imagine the frustration; it was a very dark day. I said to myself after the service was over, ‘You know, I own this restaurant and I’m held captive by this person called Chef.’ So I made a conscious decision to work in the kitchen until I reached the point where I would be prepared should that situation arise again. And I just fell in love with it. That was about seven years ago.

With Dona you’ve had firsthand experience with the turbulence caused by New York’s real estate market. That was another dark day.

Who’s to say that’s not going to happen to you again? I’m not as worried. There are certain things you just can’t control. One of them is something being sold out from underneath you when you’re just a tenant. There’s only a certain protection you have. Dona was a beloved restaurant, it was my first in New York City on a major stage. I viewed that restaurant as my Broadway debut and it was extraordinarily successful for me. It was devastating to lose it but there really wasn’t anything for us to do. We had the choice of staying through seven years of construction or taking the clause in the lease that had a formula for a pay out and we chose the latter. Looking back, it was the smartest thing we did. It would have been very difficult to run a restaurant of that caliber in a construction war zone.

Frank Bruni called Anthos the second best new restaurant of 2007. When you were working as a waiter at TGI Friday’s, did you think it was possible you’d become such a star? When I became a chef out on Long Island seven years ago I never imagined I’d be sitting here talking to you with a Michelin star and the accolades I’ve received over the last three years. It really is astounding. Writers are amazed by it; I’m even more amazed by it. I think it’s just a function of choosing a cuisine that really was unexplored and filling a void that was open and having the ability to make people pay attention to what we were doing. Fortunately I had very good people around me who helped me along the way.

You told the Times about a French fry innovation – pickled French fries – you were working on for Mia Dona. How’d that turn out? They’re fantastic. If you like salt and vinegar potato chips these French fries are right up your alley. The challenge with trying to mimic a flavor profile you find in Greece and England is that when you apply a liquid to a fried item it becomes soggy. We have a fascination here in the United States with super crispy French fries.

So I played around with the idea of capturing the flavor profile without losing the crispness and the thought came into my head to pickle them and then fry them. It’s a really special thing; it’s opened up an unbelievable amount of doors because you start to analyze why and how these things actually occur, and the chemical reactions that are going on and how the protein reacts to the oil after it’s been influenced by these things. That’s how new food gets born.

If you weren’t in the restaurant world, what other career would you see yourself in? I could only be a writer. I couldn’t be anything else.

Do you still write? I do.

But you haven’t put out a cookbook, have you? I’m in the process of putting one out. It took me a while to formulate the concept of what a cookbook should be because I didn’t want it to be just a compilation of recipes. It needed to have some sort of emotional draw where you read it and something pulls you in. I came up with this idea that revolves around short stories, things that happened in my life. There’s a tremendous amount of prose that leads into chapters and anecdotes about how these recipes came about. The way I cook is, I think, different than most chefs; because I wasn’t classically trained I conceptualize the dish from a philosophical perspective as opposed to a technical perspective. Each of the dishes has a story behind them.

Sounds great. Do you have a title? Not yet. I’m just going through choosing the publisher; I’ve been so happy to find that many people want to publish it. I thought nobody would want it and so many people are now asking me about publishing it. I’m a very black and white person; I can’t do things in gray. It’s either going to be good or I’d rather not do it. If I write a book it has to be something that I’m proud to have my name on. I come from a very old fashioned family and the only thing my mother used to say when I would go out as a young child is, “Remember, you carry your father’s name.” Never anything other than that and it’s all she really needed to do to keep us in check.

Do you ever dream of opening a restaurant in Greece? It is the ultimate dream of mine. I am now in the process of – I’ve been courted by a hotelier in Greece and we’re getting closer to getting something done. It would be the pinnacle for me because it’s difficult with Greek food here. I spent a lot of time trying to educate people about what Greek food is. When you take Greek food and revisit it and evolve it and intellectualize it and then serve it to people who don’t understand the foundation of where your inspiration is from, you kind of lose that cerebral aspect of the food. And that’s something that defines art; you need that in order to be able to call it art.

Where would the restaurant be? I think it would have to be in Athens. The fun and exciting thing for me about opening a restaurant in Greece would be serving it in this sort of homogeneous society where people know and understand the foods I am interpreting. To be able to have that as a foundation and showcase the food and push the envelope as far as I possibly could is very exciting. I think as an artist you’re lying to yourself if you’re not wanting criticism. I think that’s why you show what you create. The minute you show it to someone you’re asking for criticism. You have to be open to the fact that it can be both negative or positive. So to go to Greece and open myself up and stand naked in front of the people who would understand my food more than anyone else in the world and hear what they have to say is something I really, really want to do.