Mermaid Inn Bets on Three of a Kind 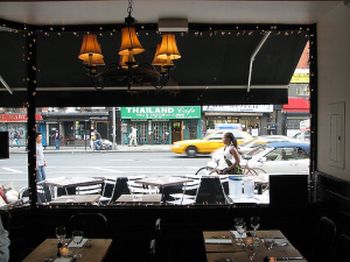 The Mermaid Inn, that inviting East Village bistro beloved for its rich seafood entrees, has moved on up to the west side with a mostly new menu. Their second Manhattan outpost is appointed with old nautical maps, dark wainscoting and roll-up doors that will surely suck in the crowds during warmer months. (Alec Baldwin must be pleased about the eatery boosting Amsterdam Avenue’s cachet.) The Inn’s famous lobster sandwich survived the move, but there’s now a bigger, badder raw bar and entrees like spaghetti with salad on top that chef Laurence Edelman is transplanting from his previous gig at The Red Cat.

But apparently Amsterdam Ave isn’t far west enough for owner Danny Abrams; he’s set his sights on a third Mermaid Inn on the other side of the country. Vegas, to be exact. But he’s got the good sense not to toss his prize fish into one of the tourist trap casinos on the strip – Abrams will be going to suburban Vegas. His combination Mermaid Inn and Prohibition-esque speakeasy will be part of “The Village at Queensridge”, a 29-acre planned community being built at the edge of Summerlin in Las Vegas. Says Abrams, “The right choice for us was not the strip, which caters to tourists, but instead going into in the vibrant, well-heeled community of Queensridge.” Well, it’s a community-to-be at this point; the Vegas version of Pleasantville won’t be ready for the well-heeled until the end of next year.

Visitors to Vegas craving some New York flavor closer to the action can be sated next spring when BLT Burger, which this year won a Time Out New York award for “Best Burger Joint”, doubles down on a new location in The Mirage casino. Chef and co-owner Laurent Tourondel will be transplanting his signature menu to the strip, which, besides the beef, features lamb and Ahi tuna burgers, thick shakes spiked with booze and sweet potato fries. According to the press release posted on Snack, there will also be “rock ‘n’ roll music pulsing throughout the restaurant" – hopefully loud enough to keep the stuffy Queensridge crowd away.