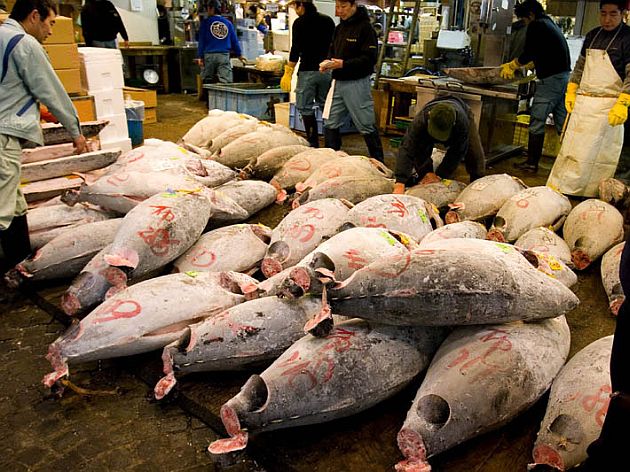 Hold onto your chopsticks; the Times recently commissioned a toxicology report on sushi from 13 local establishments and got back some rather unappetizing results:

More than half of the restaurants and stores surveyed sold sushi with so much mercury that eating just six pieces a week would exceed the amount the EPA says can be safely consumed by an adult of average weight, which the agency defines as 154 pounds, 70 kilograms. People weighing less are advised to consume even less mercury.

Tuna samples from the restaurants Nobu Next Door, Sushi Seki, Sushi of Gari and Blue Ribbon and the food store Gourmet Garage all had mercury in excess of one part per million, the "action level" at which the FDA can take food off the market.

In 2004, the FDA and EPA warned children and women who may become pregnant to cut back on canned tuna because the mercury found therein can damage the developing nervous system. (The Times notes that fresh tuna, which contains “far more mercury” than canned tuna, was not included in that advisory.) And recent studies show that all adults should go easy on the mercury, too; the nasty stuff can increase the risk of cardiovascular disease and brain damage.

It’s believed that the tuna with the highest mercury in the study was bluefin; other smaller tuna species typically contain less mercury. More expensive tuna is known to have higher mercury because it usually comes from a larger species that builds up mercury from the all the fish it eats. And according to a survey last year, the average level of mercury in New Yorkers' blood is three times as high as the national average. Go Capital of the World!!!

And this is helpful: If you’re out to eat and want to check whether the fish you’re considering ordering is environmentally sustainable, you can send a text message with the name of the fish and get the stats sent back immediately. Check it out. Also, Environmental Defense has an exhaustive seafood guide that tells you what’s safe and what’s not. Rule of thumb: Stick to the smaller fish on the bottom of the food chain.