Meet The Kings Of The Historic Lemon Ice King Of Corona

Vinnie Barbaccia was a teenager working the window at the Lemon Ice King of Corona back in 1964. At the time, founder Peter Benfaremo—who opened up shop in the '50s—was feverishly working to expand the storefront in time for the World's Fair, which was about to take place in nearby Flushing Meadows Corona Park. In the end, due to its close proximity to the park, the massive fair proved to be a watershed moment for the Lemon Ice King of Corona in becoming known throughout the city.

Now over 50 years later, Barbaccia co-owns the Lemon Ice King along with Michael Zampino, and not much else has changed in the interim. All of the signage remains the same (except for the prices) as does the secret recipe, which is so closely guarded that Gothamist was forbidden access to the production area. They did reveal one of their secret ingredients, however: New York City's winning tap water goes in to all of their flavors... and they've got over three dozen.

There is the lemon one, of course, which is everything you'd want it be, but there's also a large selection of quirkier options... like peanut butter. On paper this one seems unappetizing, but in reality it may just be the best of all (the duo confirmed it's one of the most popular). Others include blueberry, mint chocolate chip, rum raisin, sour apple, pineapple, coconut, vanilla... and so on. The paper cups filled ice range in price depending on size, starting at $1.50. 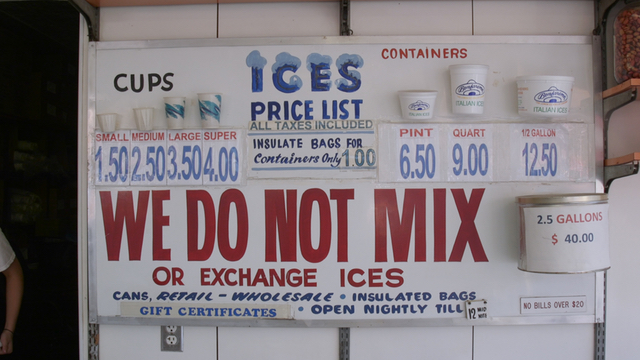 Along with the ices, the neighborhood itself seems frozen in time as well. In nearby William F. Moore Park, you can still join crowds of locals in watching fiercely competitive games of bocce that take place nearly every night during the summer, and which have been going on for decades. The area remains largely untouched by the gentrification that has swept through so many of the city's neighborhoods, perhaps owing to its relative isolation from the subway (the Lemon Ice King is about a 15-minute walk from the 7 train).

The Lemon Ice King Of Corona is located at 52-02 108th Street, less than a mile walk from the Unisphere.

#gothamist films
#ices
#lemon ice king of corona
#original
Do you know the scoop? Comment below or Send us a Tip