Meet The 'Bad Hombres' Competing In This Year's Vendy Awards Since 2004, The Vendy Awards have crowned the finest in the city's fleet of mobile food vendors, awarding prizes in categories like Best Vegan Vendor and The Master's Cup, which pits previous Vendy Cup winners against one another. This year, the Vendys are taking aim at Donald Trump's racist assertion that "we have some bad hombres here," a comment the then-Presidential nominee made during the third and final presidential debate in 2016 about immigrants in the United States.

"NYC street vendors—almost all of whom are immigrants, many of whom are Muslim, many of whom are Latino, and many of whom are undocumented—have paid a steep price since Trump's election," says Sean Basinski, director of the Street Vendor Project, which puts on the Vendy Awards each year as a fundraiser. "We created the Bad Hombres category, celebrating Latino food vendors, to acknowledge the difficulty our community—among many others—is now facing. By using his own words, we seek to mock Donald Trump and subvert the culture of fear he would like to create. We wholeheartedly embrace the same aspects of street food—its diversity, its accessibility, its inclusiveness—that he would condemn. We honor the same people that Trump would disparage. We hope you will join us."

Four vendors were selected to participate in the "Bad Hombres" category; let's meet them. 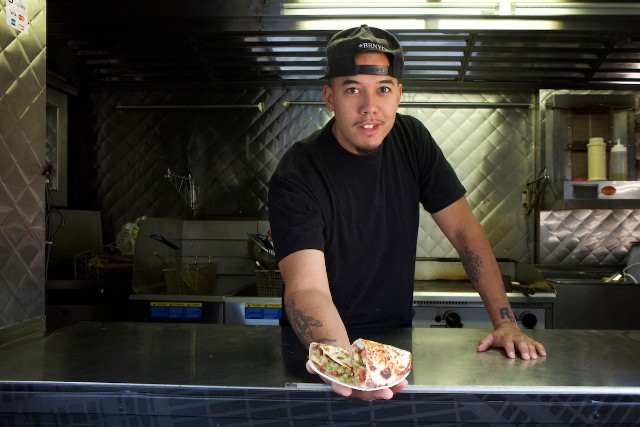 Born & Raised seems to speak to your history, your family's history; what's in that name and how does it inform the kind of food that you serve? Born & Raised NYC...I'm born and raised in Brooklyn. When somebody asks you where you're from, "Oh you're from Brooklyn?" Maybe your answer is, "Yup, born and raised." It's a certain level of pride that goes into being born and raised from New York City, especially from Brooklyn, so that level of pride is how we work on my truck, how we cook, and how we present to the customers. My family background is half Puerto Rican and half Dominican, so that also comes from a certain level of pride saying, my family...we're not from here, they immigrated here years ago, obviously way before me, but just the fact of making it to here and from here. For me it speaks volumes about the level of pride and passion that goes into everything that we do on our truck.

What kind of food do you serve on a daily basis? Right now we're serving a mostly Mexican menu. Tacos, quesadillas, wraps, burritos. We do everything fresh on the truck at all times—minus the tortillas, we buy those. The reason I chose the Mexican menu is because right now in New York City that is the most popular cuisine and it sells very well. When it comes to my truck, it says "Latin American Comfort Food," so we will be incorporating different cuisines from Latin America, so I will be bringing in—probably by next year—we're going to be bringing in some Puerto Rican food, some Dominican, maybe some Colombia. So it will be a well-rounded, Latin American food truck.

What will you be serving at the Vendys this year? We'll be serving quesadillas, that's what we want to be known for on our truck. We do quesadillas differently than everybody else. Our style is to put everything inside, so your choice of protein, pico de gallo, salsa verde and sour cream—and if you want to add guacamole we put it right inside the quesadilla as well. Also, our presentation is a little bit different. Instead of it being a big, 12-inch tortilla cut into three pieces, we use a smaller tortilla and we just fold it in half and serve it to you like that; it's not cut unless you ask for it. Last but not least, probably the most important, is our quesadillas are always served with a nice crispy crunch.

What does it mean for you to be included in this new "Bad Hombres" category? The "Bad Hombres" category was actually presented to me by the Vendy team and they explained it to me briefly; it goes into something Donald Trump was saying in his run for the election. I stand behind [the category] because being a Latino in New York City, I'm very prideful like I said before, I'm very prideful where I come from, what we do. I'm very proud of my Latino heritage and for him to try to downgrade us and try to speak negatively about us...it really hurts, it really hurts. I would say it's an honor to be able to represent our Latino heritage in this kind of category at the Vendys.

Where can people find you outside of the Vendys? We definitely move throughout the city—on Broad Street and Water Streets in the Financial District and 55th and Broadway in Midtown, for example. But the past way to keep up with us is by following our Instagram page. 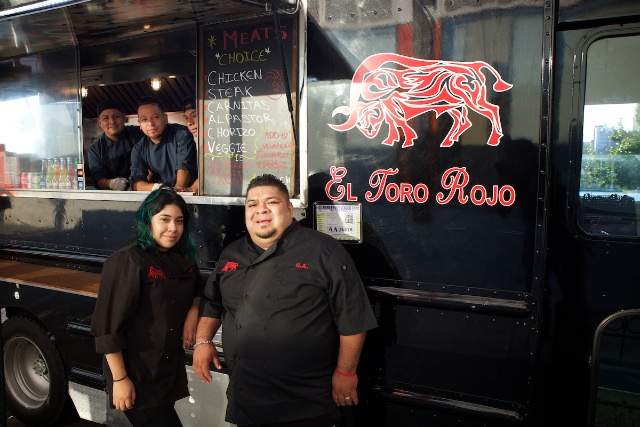 How long have you been in business? Almost a year. One year in December.

What types of foods do you offer? We offer homemade Oaxacan cuisine

What does it mean for you to be included in this new Bad Hombres category We are a Mexican owned and managed business, offering traditional Oaxacan food on the streets of New York. We are a family ran operation with our Owner/Chef, who moved with his family to the states from Gerrero, Mexico and his first generation American born son running the operation. You throw a Bulgarian in the mix and we are a family of bad hombres. This category celebrates us.
Where can people find you outside of the Vendys? We park for lunch in Midtown daily and over at the LIC pier in the evenings or during the weekend. For our exact weekly schedule follow us on Instagram/FB or Twitter at @eltororojotruck. 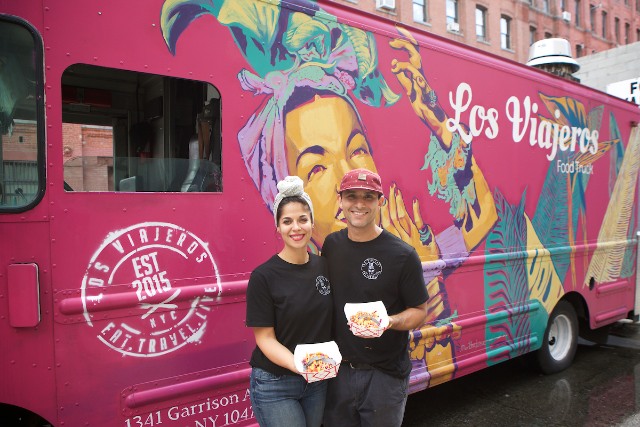 What types of foods do you offer? We specialize in Latin fusion tacos, burritos, and quesadillas that are unique to Los Viajeros.

What will you be serving at this year's Vendy Awards? This year we will be serving a variety of tacos at the Vendys.

What does it mean for you to be included in this new Bad Hombres category? It's an honor to be nominated for any category at the Vendys but we identify with this one specifically because we represent small businesses and hard working people everywhere, from all walks of life.

Where can people find you outside of the Vendys? Our schedule varies so you can always find an updated itinerary on our website, losviajerosfoodtruck.com. 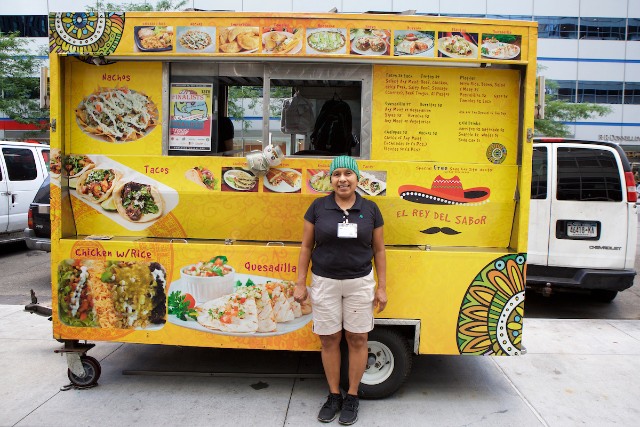 How long have you been in business? About 10 years.

What types of foods do you offer? Mexican food. Tacos, burritos, quesadillas, enchiladas.

What will you be serving at this year's Vendy Awards? Four different types of tacos: beef, chicken, spicy pork and vegetable.

What does it mean for you to be included in this new Bad Hombres category? Even though we have a bad president, Mr. Trump, we as street vendors, we feed the city and we feed people.

Where can people find you outside of the Vendys? 255 Greenwich, 43rd and 6th Avenue, and 60th and 3rd Avenue.

Some interviews have been condensed.

#bad hombres
#street vendor project
#street vendors
#trump
#vendy awards
#original
Do you know the scoop? Comment below or Send us a Tip