Filmmaker Matthew Beals has been working on a movie about Peeps for the last four years. He quickly found out that many people across the country, and probably the world at large, have a real fascination with the squishy little chicks. Beals tried to fit as many of their stories into his now finished film.The Power of the Peep (trailer) will premiere at the Third Annual NYC Food Film Festival. Those lucky enough to attend the world premiere of this movie, which closes the weeklong festival, will find themselves in a room filled with 8,650 Peeps (more information on the full lineup can be found here). We asked Beals about his enduring love of all things Peep, including the dark side of the sunshine-yellow marshmallow.

Your documentary film, screening at next week’s NYC Food Film Festival, is about Peeps. How did you get involved making a film about marshmallow chicks? Why Peeps? Well, I was always fascinated by Peeps. They were this bizarre oddity on the shelves that came out every Easter. I remember getting excited every Spring when the Peeps would hit the shelves. The look of their neon colors and black, beady eyes repeating themselves one after the other down the aisles brought me great joy. And really, it wasn’t until years later that I googled the words “Marshmallow Peeps” and a whole world opened before my eyes. I discovered hundreds of Peeps web sites out there, and all sorts of fans expressing their passion for Peeps—scientists, punk rockers, librarians. Even NASA! And then I discovered there was a classic immigrant story behind Peeps and realized that this was the ultimate American story to tell.

And you’ve been working on this film for a while; I found a New York Times clip from 2006 that basically states you’re finishing up production on the film. You know, it really just started out as a fun idea. Little did I know Peeps would conquer the next 4 years of my life! First, I went with my friend Adam to Union Square with a bag of Peeps and started talking to people about themin front of my camera. But then I emailed Peeps fans who had websites, and they were all up for being interviewed. So I hopped in my car for a Peeps road trip. Eventually I was granted access to shoot on the factory floor of the factory where they’re produced, and the whole film just took on a life of its own.

So the story with Peeps is that they were originally these precious, twee handmade candies, and it was only later that they became mass-produced. Who is this Pravin Pant Sr. person listed on Wikipedia as the person who introduced mass market Peeps in 1958? Pravin Pant Sr. Ha! I saw that posted on Wikipedia and it’s totally not true. Someone made it up, and it was sort of too funny for me to correct.

I need to know: who invented Peeps? Peeps were originally hand squeezed out of pastry tubes from a very small operation by the Rodda Candy Company of Lancaster, PA. They were just a small, local, Pennylvania candy at first. Then Samuel Born came along; he was a Russian immigrant who had his own little chocolate candy company called Just Born. What’s funny about the story is that Born acquired the Rodda Candy Company to get their jelly bean technology. The marshmallow chicks they made were just an aside at first. But ultimately Sam’s father invented a machine that could mass-produce Peeps, and now here we are today: 800 million Peeps are made just for Easter. It’s 1.4 billion Peeps, year-round, if you include all the shapes. 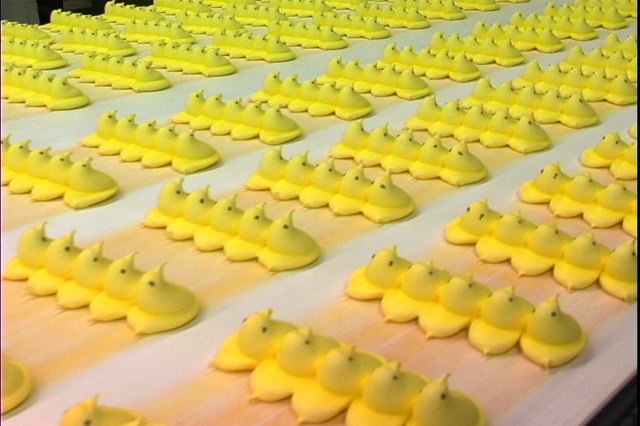 The production line, from Power of the Peep

Those assorted shapes are seasonal, like Jack-o-Lantern Peeps for Halloween. Is there a collector's market for old or hard to find Peeps? There was one lady in upstate New York that had an entire Peeps archive. She was an actual archivist in her real profession, too. But then ants got to her collection and destroyed it.

Sad. I was actually going to interview her but she refused to speak to me. Did you know that up until the early 60s Peeps had wings? It would’ve been cool to hold a winged Peep—now, no man may ever be able to again. Just Born also made marshmallow hot dogs in the early days, too.

Is there a Holy Grail of Peeps? If there’s a Holy Grail of Peeps it’s got to be the giant warehouse in Pennsylvania where they store millions of them before they get shipped out for Easter. Then the day after Easter they start making Easter Peeps for the following Easter. One million Peeps are made every shift.

I imagine that Peeps are pretty shelf stable, like Twinkies. Is this true? Yes, Peeps have a shelf life of 2 years! They’ve been dipped in liquid nitrogen, run over by bulldozers and obliterated by shotguns. This is all in the film; the Peeps have still survived all these years!

Can you talk a little bit about the various Peeps subcultures? I see there are Peep artists, a Lord of The Peeps person, and so on. Without giving away too much, let’s just say there is no type of American that hasn’t been touched by the power of the Peep. Everyone from scientists to punk rockers to your classic American family—they all have their own way of professing Peeps passion. 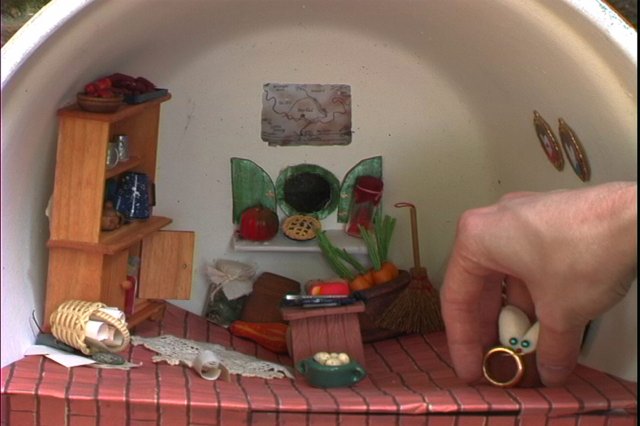 There are those who are anti-Peep, too, though, huh? Some of the people in my film see the Peep as a cute and cuddly candy. Others see it as an evil, artificial blob. Some see it as a work of art. Others still see it as a toy to dress up and play with. And even others create whole events around the Peep. It’s amazing because Peeps have truly surpassed themselves as just a candy. It’s way more than something you just eat.

So your film is kind of like Peeps Across America. That’s sort of the magic of the film too: that it’s really more about America than it is about the Peep itself. My discovery in making this film was that if you follow the Peep through time from the 1950s until now, you also follow a sort of evolving American way of thinking. The Peep exists as this cute and cuddly nostalgic candy of the 1950s, reminiscent of spring and white picket fences and family. But something happened when the Peep entered the 1990s—the internet happened, really, and the Peep became an official Easter staple and now you can buy Peeps shower gel and lip balm. They make 1.4 billion every year and there are hundreds of web sites and fans. The Peep manages to coexist as part of the old nostalgic vision of America and modern America. 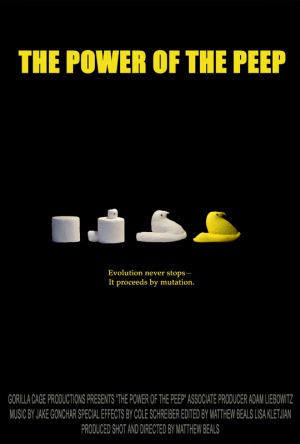 Is there a dark side of Peep love? Is there anything you encountered during the filming of your documentary you had to leave out because it was too disturbing? Peeps tend to inspire passion in people. That passion can be either hate or love. There doesn’t seem to be much middle ground with Peeps. In fact, I’d say many people’s hateful reaction to Peeps is a big reason they have a following! One Peeps “fan” in my film says No one in their right mind would eat them! So what else are you going to do with them? And I think that says it right there. That blank slate of a Peep is sitting there, staring at you. You’re not gonna eat it, so might as well do something with it!

I see. There’s a group of people in the film that think Peeps, along with chocolate Easter bunnies, are representative of all that is wrong with the holiday. For a holiday based around renewal and spring and resurrection, they feel that having fake artificial candy is a direct affront to that. And they express this rage in a very amazing way at a spectacular event that you can see in the film.

I imagine that’s the equivalent of the Burning Man Festival for Peeps. I noticed that you're a Director of Photography. Are you going to make another documentary? My next documentary is going to be about the candy circus peanuts. Just kidding! This film has been a 5-year process and it’s not over yet because I’m still trying to find distribution for the film and get it out there. But I’ve always been more of a narrative guy than a documentary guy. Right now I’m making a short film that takes you from the dawn of man to modern man in about 2 minutes flat. I’m also in the development stages on a feature I want to direct called “The Gorilla Cage.” It’s about a young boy growing up in a wacked out version of suburbia who develops a bizarre condition and how he seeks refuge performing as a gorilla at a kids’ carnival. I’m also a singer and compose my own solo vocal music called ISOMER. I’m working on a new album and hope to have it finished soon.

What’s your favorite restaurant in the city? I’m a big fan of that place B&H in the East Village. It’s vegetarian food served in this small hole-in-the-wall, classic diner setting. Their fresh challah bread and mushroom barely soup is heaven on earth. I also love Punjabi on Houston Street across the street from Katz’s. You can get spicy Indian food on a bowl of rice for $2.50, and they also have great veggie samosas. It’s the one place in New York where you see Indian taxi drivers and white 20-somethings all convening in the same place for the same purpose. Gotta love it! 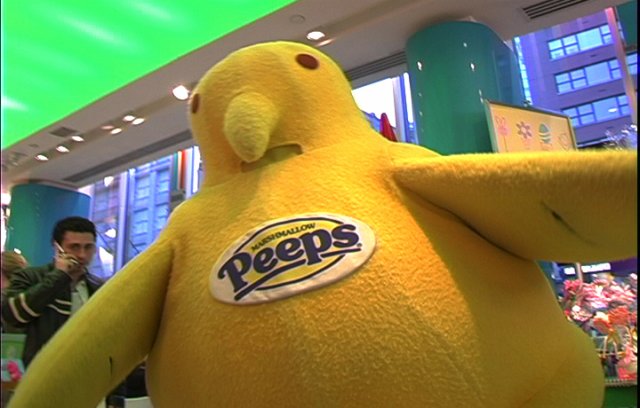 "Call the cops, there's a giant Peep here in Pathmark;" from Power of the Peeps

What's your strangest, Peep-related story? One of the Peeps fans in the film emailed me images an anonymous girl had sent him. She had pierced Peeps with needles into her flesh. Through her nipples and everything! Eeeesh.

What’s your strange, “only in New York” story? There are so many. Just last week, I was just walking past a bakery on the Lower East Side when in the display window next to the pastries there was a pigeon. It was panicked and flapping its wings and stomping all over the donuts. I went inside and found two girls who worked there behind the counter trying to figure out what to do. I offered to help them, but then one of the girls just grabbed the pigeon and let it loose. It flew right past my head and out the door.

Do you think the Just Born company will ever produce a vegan version of Peeps? Well, just recently they started making sugar-free, Peeps so I guess they've proven anything is possible.