Mary’s Dairy Goes Tits Up and Auctions Everything 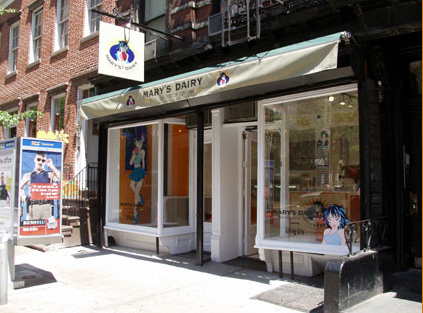 East and West Village sweet tooths went into withdrawal last weekend with the abrupt closure of both Mary’s Dairy ice cream and chocolate bars. The plucky little parlors had developed a loyal following since scooping out their first location in a former West Village leather shop. They soon became a favorite pit stop for lithe model-types who swore by their tasty fat-free soft serve, which, according to the Times, succeeded in avoiding “the chalky taste of similar products.” Reached by phone this morning, the co-owner of the parlors, who insisted on being referred to only as Mary, blamed the usual suspects in her Dairy’s demise: “We have very loyal customers who all say they’re going to miss us, but it just comes down to Con Ed and rent.” First Con Ed came for the ice cream – can Christmas be far behind?

Now East Villagers screaming for ice cream are reduced to crawling to the nearby corporate chains of Cold Stone Creamery. But not so fast! The Cold Stone near St. Mark's is closed for renovations so they can start dispensing an array of Original Soup Man “products.” So no ice cream and no soup for you! (Until November 1st.) In the meantime, why not break free of ice cream shoppe dependency entirely by starting up an ice cream parlor in your kitchen? Stop by either Mary’s Dairy location this afternoon for an “everything must go” auction and snatch up tubs of left-over ice cream, all their equipment, refrigeration units and – at the West Village store only – T-shirts. The West Village auction starts at 3pm; the East Village gavel bangs at 1pm, so get a moooove on! (Sorry.)