When Marc Forgione opened his eponymous Tribeca restaurant in 2008 (at the time it was called Forge, but a Miami Beach restaurant with that name forced him to tweak the title), the first thing that caught the media's attention was his last name. Marc is the son of successful chef Larry Forgione, but over the past couple of years, Forgione the Younger has proven himself a serious and talented chef, with a style all his own. His restaurant specializes in inventive, seasonal "New American" cuisine ranging from "safe harbor" swordfish to Colorado Lamb Chop to pork belly sliders, all served in a sexy, post-industrial dining room with a circa-1906 cast iron oven in the middle, from which fresh bread emerges daily. Next week the New York Times will publish its review, but other critics have already praised the restaurant, with Gael Greene opining, "Not a molecular burp anywhere. Just real food most food-obsessed New Yorkers want to eat."

Starting Sunday, Forgione can be seen in the third season of The Next Iron Chef, which premieres at 9 p.m. on the Food Network. Hosted by Alton Brown, the elimination-style series also features New York-based chefs Maneet Chauhan (Vermillion), and Marco Canora (Chef & Owner of Hearth, Terroir, and Terroir Tribeca). Yesterday we spoke with Forgione about the show, the dining scene, and how kicking a Times reporter out of his restaurant changed nothing.

How familiar were you with Iron Chef? Were you a fan of the show?
Yeah, I've been watching the Japanese one since I was a kid. So when we got the invite I didn't even have to think twice about it.

Suppose I've never seen a single episode of Iron Chef, how would you describe it? It's kind of like Gladiators for chefs. What's that Mad Max thing, two men enter one man leaves? [Laughs] It's just two very competent people going head to head with their craft, and battling it out, you know?

So this is an elimination series. What other chefs were you up against?I was up against a bunch of different guys. From New York in particular was Marco Canora and Maneet Chauhan. And we had Andrew Kirschner from LA , Mario Pagan from Puerto Rico, Mary Dumont from Boston. I mean, it was from all over the country. Chef Celina Tio from Kansas City, from Sonoma County was Duskie Estes, Bryan Caswell from Houston. All in their own right, arguably, are top chefs or best chefs in their respective city.

Did you make any new friends or enemies in this filming?
Oh yeah, I mean they're all my buddies now. We had a great time. We have a lot of respect for each other; I think we learned from each other. I know I'm a better chef because of it.

How so? Well, I think it kind of sparked something. You know, I think you really have to dig deep when you're doing something like this. Somebody tells you that you have 30 minutes to make something and they throw an ingredient in your face. I think there's an untapped part of your creativity sometimes, and once it woke up I came back to my restaurant and found my creative juices really flowing.

How long did it take to shoot? It was three days to make one episode. 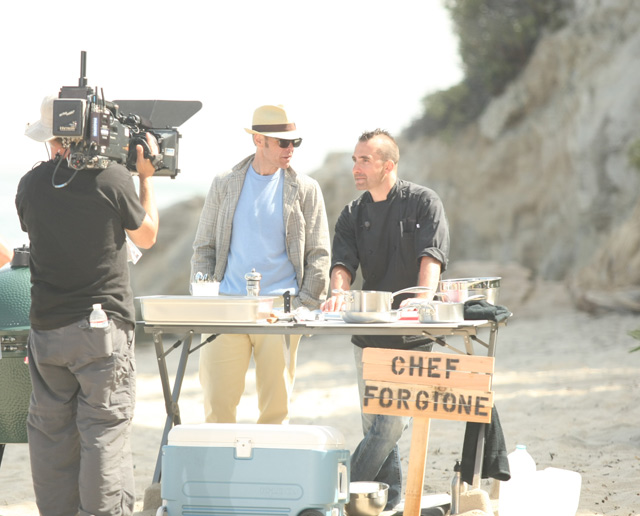 Wow! As someone who watches the show, what surprised you about the actual process of how it's made? I was surprised at how real it was, to be honest with you. I think anytime you watch any kind of television you're always wondering that it's made for TV and there's no way he really did that, or there's no way he actually made that in that amount of time. You wonder if that's really possible, but they were very strict about all their rules once that cooking started. Like if you cut yourself, they didn't stop it, they just bandaged you up and you kept going. There's no time out. You just have to put your head down and cook.

Did anybody get cut up? Yeah, a bunch. The first one in particular actually. Well, you'll see. [Laughs] Yours truly, also.

Are you okay? Yeah yeah, I'm fine. Especially with the first one, there's a lot of adrenaline and action and camera and lights. It's exciting.

What's frustrating about this interview is that you can't really tell me anything. Nope, you'll have to tune in and watch. [Laughs] I'll tell you what I told everyone else. I can tell you what happens but it'll cost you about $850,000.

Is that what they would sue you for, according to your contract? Yeah, something like that. And then a little extra for me, as my payment.

What I would like to ask you is if you have any thoughts on the impact of TV shows and the Food Network on your profession. I mean, yeah, you can't argue the fact that people watch TV and a lot of it these days. There's definitely an impact and then it eventually is up to the chef on how they want to be portrayed and what they want to do. That's what attracted me to The Next Iron Chef. It's not really a character show, it's more of a talent show.

Do you have a favorite Iron Chef, or one that you would really like to defeat? I'd love to go head to head with [Hiroyuki] Sakai if he's still around. He was from the original Japanese show, and I loved watching him cook when I was a kid.

It sounds like Iron Chef was about as much an influence on you wanting to be a chef as your father. I mean, I wouldn't go that far. But you know, it was something that, now that I'm a professional chef, that if you look back at my childhood it's funny to think of how many other 10-year-olds stayed up late after their parents went to bed so they could watch Iron Chef. I'm sure there were other TV shows that other kids would be watching but I've always been interested in cooking in general.

And you worked for a year with Michel Guerard in Eugenie les Bains?
That was amazing, it was like cooking boot camp. I just got dropped off at this tiny town, population 400, 20 miles in either direction there was nothing. Didn't have a car, TV, a phone. Just woke up each day and just cooked. We met the people out there, learned the language and learned their ways. It was really cool, you had to prove yourself before they even let you touch anything. It was a very humbling and maturing learning experience.

How long has your restaurant been open now? June was two years.

Rumor has it you're going to be reviewed in the Times next week. That's what I hear. It took two years and I look forward to reading it.

What do you think of the role of critics today, when food blogs and websites like Yelp are becoming more powerful? Do you think it's a good thing or bad thing that the role of professional critics may be diminished? I mean, I don't think their role will ever be finished. I tell my staff and my cooks every day that "last night we did 116 covers, so we got reviewed 116 times" and that's not because they can blog about it or they can get it published in the New York Times. You have to cook for everybody. Once you start cooking for a critic or a blogger, in my opinion, you're going down the wrong path. When you have the specialty menu or special service when you spot a critic, or you save a special cut of meat and label it for a reviewer. I mean, what are you doing, you know? I'm very curious to see how this review comes out, but again, I don't think it's a bad thing that people get to voice their opinion. Do your thing the same every day and take pride in what you do and you'll be alright. I think we're a testament to that. We're two years in with no New York Times review and we're doing just fine.

We last spoke after that whole brouhaha when that Times reporter walked into the kitchen and told you to keep it down. I'm curious if that had any affect on people making reservations, or on your business in general?
No, I mean the week after that we got a couple of prank calls and a couple of people coming in and asking if I was gonna yell at them, but that fizzled out pretty quick. Which I knew it would; I think I said that to you before. That was a big circus and I think I even said to you that I didn't want any real part in it. And like I said, it fizzled out, but people still do come up to me. Especially other chefs [Laughs] They'll say "good for you" or something.

Are there more of these events? It just seems like there are so many things now, where you see photos of a chef at a different event almost every night. Maybe it's just the season? Yeah, I think it's just the season. I mean, I'm signed up for four or five over the next month. I'm at the Taste of Greenmarket, I'm doing the Botanical Gardens, I'm doing an event for the Michelin guide in Orlando, I have the New York Food & Wine Festival, I have a lot of stuff. I do most of them because they're for charity and the others just because it's good to get out there.

Is it tough to translate what you do in the restaurant to that sort of limited situation? No, not if you pick the right dish and pair it well. It's just like anything else.

The diver scallop dish you made at the Star Chefs event was outstanding Thank you. That's a perfect example. That's a rendition of a dish we do at the restaurant. Was it exactly the way we do it at the restaurant, obviously not but we do it and you remembered it. I'm not going to make any excuses and say "oh well, I'm at an event so it's not gonna taste good". That's what I do, I make food taste good.

Thanks a lot for talking to me and congratulations on winning Iron Chef! [Laughs] Well, I haven't won anything yet.