Mapping Out The Best Egg Creams In NYC 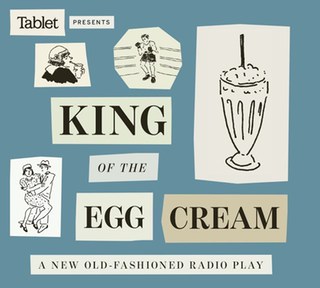 Egg creams—described as frothy and bubbly and sugary and milky all at once—don't exactly sound delicious, but somehow they are. The classic New York City staple—invented in Brooklyn or on the Lower East Side, depending on who you ask—mysteriously contains no egg nor cream. The most popular origin story is as follows:

"Sometime in the 1890s, [LES] candy shop owner Louis Auster concocted the drink by accident. It’s said he sold thousands a day. But when Auster refused to sell the rights to the drink to an ice cream chain, a company executive called him an anti-Semitic slur and he vowed to take the formula to his grave. Without Auster’s special syrup, other soda fountains relied on a Brooklyn original: Fox’s U-bet chocolate syrup, containing water, sugar, corn sweeteners, cocoa and some secret things.”

Bon Appetit and Tablet have gotten together to produce "an old-time radio play (written by Justin Bartha, Emil and Sigmund Stern) about the sweet, syrupy egg cream racket of New York City in the 1920s." It will be performed live at Russ & Daughters Cafe at a private event next week, and a previously taped version will be released as a podcast on November 20th. The play features Justin Bartha, Richard Kind, Alex Karpovsky, Ari Graynor, Ellen Barkin, Lewis Black, Joe Grifasi, and more. Before tuning in, try out one (or all) of the city's best egg creams.

To make your own, all you need is 2 tablespoons Fox's U-Bet chocolate (or vanilla) syrup, 1 1/2 ounces whole milk, 3/4 cup seltzer, and a fountain glass.

#egg cream
#egg creams
#map
#podcast
#radio play
#original
Do you know the scoop? Comment below or Send us a Tip