The makers of that handy coffee shop subway map have updated and expanded their original offering to include western Queens and northwestern Brooklyn. Butterfruit labs put out the update this morning, extending their caffeine coverage to include trendy neighborhoods like Williamsburg, Long Island City, Park Slope and Fort Greene.

Brooklyn Roasting Company makes the grade over in DUMBO while Toby's Estate caffeinates you off the Bedford L. The Queens Kickshaw keeps you buzzed by the 46th Street stop in Astoria and Mama's Backyard is where to get cappuccino and cannoli in Corona. Starbucks sneaks in at the Atlantic-Pacific hub, which sadly appears to be the best bet for the area, so enterprising baristas take note!

The map also switches up some of its earlier Manhattan picks, including taking my advice about DTUT off the 6 train in Yorkville and ditching Starbucks and adding Grinis Bakery and La Nomade at the end of the 3 line in Harlem. The map now also notes which coffee shops offer Wi-Fi, an important detail for nomadic laptop users. 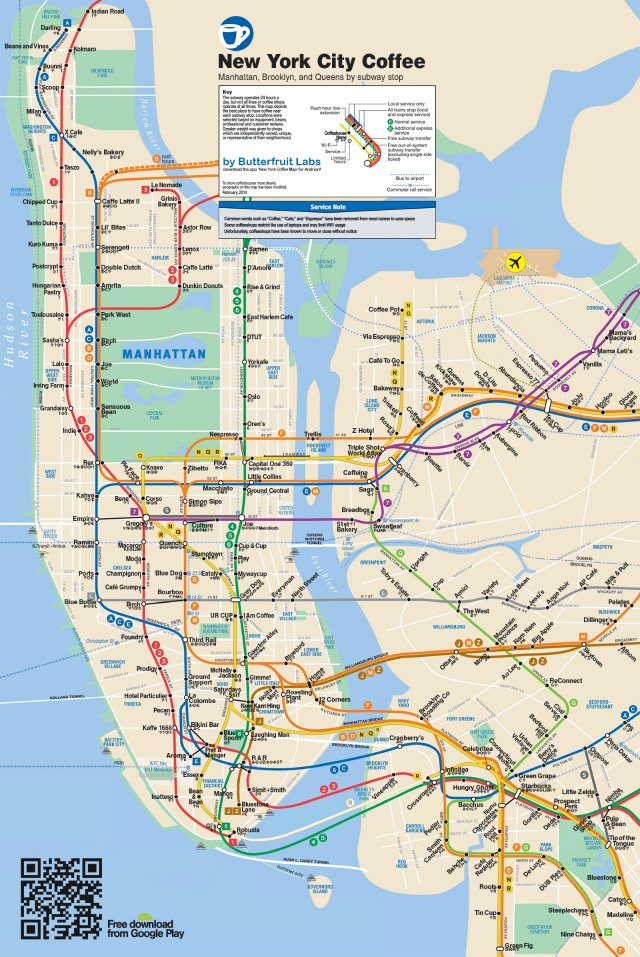 #coffee map
#coffee shops
#subway stops
Do you know the scoop? Comment below or Send us a Tip