Map: How To Avoid The St. Paddy's Day Parade Tomorrow

Tomorrow the 252nd Annual New York City Saint Patrick's Day Parade will wind its way up the streets of Manhattan. And many, many people will have a really great time (including many rowdy revelers from outside the city and the many folk who will be marching [PDF]). And that's great for them. But many of us will also be spending the day trying to actively avoid the annual Lepre-Con. For those folks, we've got a map of where you DO NOT WANT TO BE tomorrow between 11 a.m. and 5 p.m..

Before we get to the map though, we want to reiterate one more time that although St. Patrick's Day itself is on Sunday the Manhattan parade is being held on Saturday (the official reason is to accommodate "religious observances"). Here's the parade route (in solid green) and the areas where you can expect to see the most congestion as it marches: 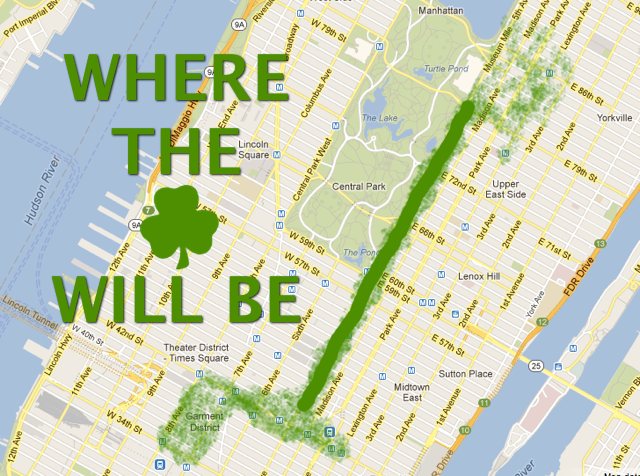 Watch out for the green.

Of course, after the parade things only get worse (or better, if that is your thing: no judgements!) when folks who've been drinking since the a.m. start stumbling out across the city. Especially around the Upper East Side (where the parade ends), and the usual weekend stomping grounds of inebriated youths: Murray Hill, the East Village and the Lower East Side. You have been warned.

As for Sunday, the holiday itself? Manhattan shouldn't be too bad (if a bit messy) but you probably want to avoid Staten Island. Though we actually find the Staten Patten parade quite charming...