Man Plans To Live Entirely Off His Wife's Milk

The price of milk is rising and interest in human breast milk seems to know no bounds, so you knew it had to come to this eventually: one man has decided to see how long he can survive on a diet consisting entirely of his wife's breast milk. And naturally, he and his wife are blogging their experience. Cause, really, what else are you going to do with a 22-cubic-foot freezer of milk that breast milk banks won't take? 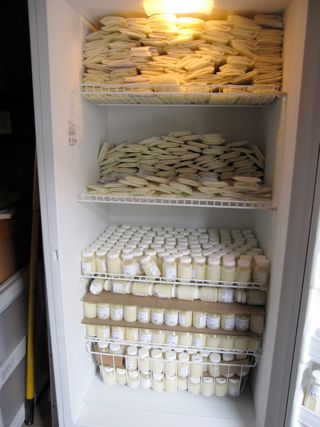 The story so far: Curtis and his wife Katie, a childbirth and lactation educator, have three children. After their first baby spent time in the NICU Katie got into the habit of pumping milk "religiously every two hours round the clock for fear that my milk would dry up." That left her with a huge surplus of milk which she used to feed her first child while pregnant with her second. Her second child also spent time NICU, and she quickly filled up a 7" cubic freezer with more milk, which she eventually donated. Over six months she gave more than 10,000 ounces of breastmilk to an adopted premature drug baby who was not responding well to formula!

And then Katie got pregnant again, and again the baby went to the NICU. This time they ended up with an even bigger freezer full of the white stuff (right), which sadly no milk banks would take (for various reasons including the medicines she had taken while pumping). So this time they were just going to save the milk for themselves...until they realized they had to move and that the cost of transporting so much lactation would be quite expensive. So Curtis decided to take one for the team and drink the milk, and just the milk, for as long as his body will let him. They just finished day two.

The couple is taking their little experiment quite seriously though, tracking Curtis' weight and calorie intake and watching for any ill effects. Katie's milk has been tested to contain approximately 27-32 calories per ounce and Curtis needs 2,000 calories a day, so he's aiming to down 66 ounces of his wife's product a day. Though the first day he didn't quite make his numbers, he did on the second and boy, hes sure seems happy! In his words: "Hunger is pretty much non existent and manifests itself mostly as thirst. I quench the thirst 16 ounces at a time and that keeps me satisfied from 2 to 4 hours. I feel good, happy on a full belly, and I feel that it should go well. I may even be sad when all the milk is gone from the freezer..."

Sadly, as of now, it appears that Curtis and Katie aren't planning on doing anything else with their milk but they are just at the start of their experiment. We hear ice cream is delicious!