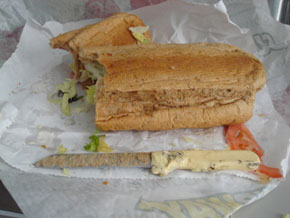 The Post has the latest "oh sweet Christ, what the hell is this thing in my food!?" story, and this one’s a keeper: 27-year-old John Agnesini plans to sue Subway after he found a large serrated knife baked into the bread of his 12-inch cold-cut sub. Agnesini bought it from a Subway on West 35th Street last month during his lunch break:

After taking a few bites I could tell something didn't taste right. Then I felt something hard on the bottom of the bread. I turned it over and could see the knife baked inside. It's shocking. You see this metal knife. I mean, it's one thing seeing a hair or something. If I didn't look at it, could you imagine what would happen? I could've slashed the side of my mouth.”

That’s what his lawyer’s talking about! As if paying homage to Kramer’s lawyer Jackie Chiles, Agnesini’s attorney Yetta Kurland tells the Post, “It is outrageous that someone would have to worry about swallowing a metal knife and it is unthinkable that Subway, which makes fortunes off its campaign of 'Eat fresh,' would allow something like this to happen.”

Agnesini, a designer for Homo Xtra magazine (“the hottest guide to gay nightlife and culture in New York City!”), says he wasn’t injured but did became violently ill with "severe stomach issues" for three hours. A doctor diagnosed him with food poisoning and Agnesini suspects contaminants from the “filthy” melted plastic handle of the knife seeped into his first innocent bites of the sandwich.

#food
#knife
#lawsuit
#sandwich
#sub
#subway
Do you know the scoop? Comment below or Send us a Tip