Man Falls Through Floor at Ruby’s on Coney Island 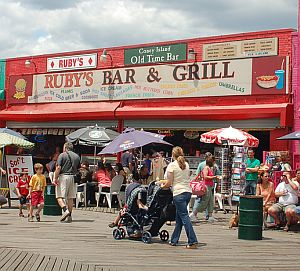 A patron of the Coney Island boardwalk bar Ruby’s got sent on a shocking detour during a trip to the men’s room over Memorial Day Weekend. It so happened that Observer reporter Chris Shott was having a beer at the bar around 5:30 Saturday when the owner abruptly pulled the plug on the jukebox and threw everyone out.

As the boozy crowd abandoned their beverages and shuffled out, a slew of firefighters, police and paramedics huddled in the back amid the eerie glow of a bright Coors Light sign near the men’s restroom… An officer in shorts and a blue polo shirt marked “Community Relations,” bluntly summed up the situation: “One guy was taking a leak, the floor partially collapsed, and he fell 10 feet.”

He fell into the basement where there were "rats...bigger than dogs" and was able climb out on a ladder. After emerging from a 6' by 6' hole "literally covered in shit" (the plumbing was also damaged!), he was taken to the hospital.

Shott sees the accident as indicative of Coney Island’s current state of affairs: While developers, the city, and the community argue over what shape the new Coney Island will take, the area falls further into disrepair. A neighboring merchant tells the Observer she’s “worried that the incident might give Ruby’s landlord, developer Joseph Sitt of Thor Equities, enough of an excuse to finally demolish the old brick building, much like he bulldozed the batting cages and go-cart track behind the bar last year.” Though it’s difficult to imagine the boardwalk without Ruby’s – a scruffy institution for decades – it’s just as hard to see how it can fit in with the current slick and soulless vision for a Vegas-style Coney Island.