Now that temperatures have finally dropped into seasonally-appropriate conditions, you can safely use your oven without turning your apartment into a smoke-filled sauna. This roasted pork recipe uses spicy and sweet seasonings like ginger, honey and chili paste for a comforting and filling meal you can easily (trust me) whip up on a chilly night. Hearty brown rice, fortified with crunchy and fiery bits of kimchi, provides an excellent side to bulk up the meal, while tender baby spinach adds a vegetable component even the pickiest of eaters will devour. Even better, if you're just cooking for one or two, you'll have plenty of pork and rice left over to make a killer fried rice or some enviable lunch leftovers during the week. 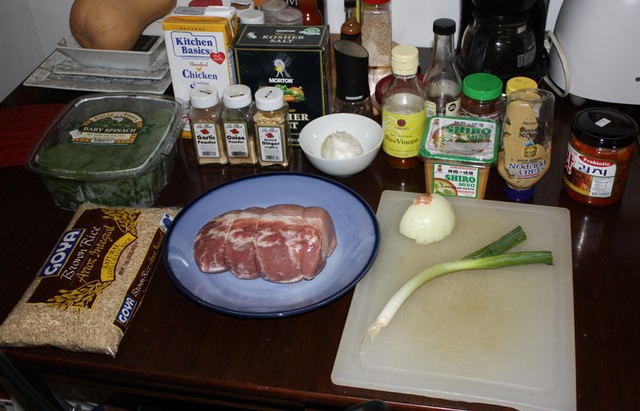 Preheat oven to 375 degrees. I actually forgot to do this when I was most recently making this recipe and boy-oh-boy was I in a pickle when it came time to roast the pork! Do not forget this step.

A moment about the meat: at your local grocery store you'll likely see pre-packaged "pork tenderloin" in the meat case. It's long and pink and looks disturbingly like...an eel, YES THAT'S IT. While there's nothing wrong with pork tenderloin except that it's tough and dries out faster than a stoner in the desert, for our purposes high thee to your local butcher and look for the pork tenderloin roast. It's a bigger, fattier hunk-o-flesh and stands up much better to the searing and roasting process than its snake-like brother.

Okay back to the recipe! Combine all the spices for the dry rub in a bowl or Mason Jar or whatever you cool kids are using these days. Salt and pepper the pork then sprinkle with the spices until the meat is evenly covered in a dusting of deliciousness. Sure, you could add the salt and pepper to the other spices and yes I probably should have done that but it was late and I may or may not have also been simultaneously drinking Bushmills on the rocks so there you have it. 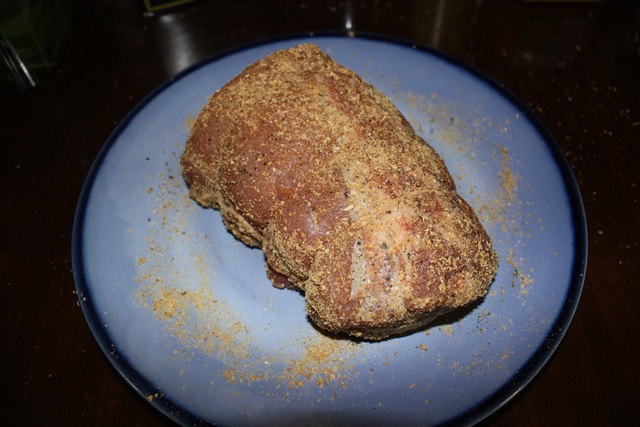 Heat the vegetable oil in a large, oven-proof pan over medium high heat. When it begins to smoke a bit, add the spiced pork and sear on all sides—including the ends!—until it achieves a nice brown crust. When you flip the pork onto its final side to brown—make sure it's one of the long sides so it's not balanced precariously—immediately remove from the stovetop and move it to the oven. It should look something like this: 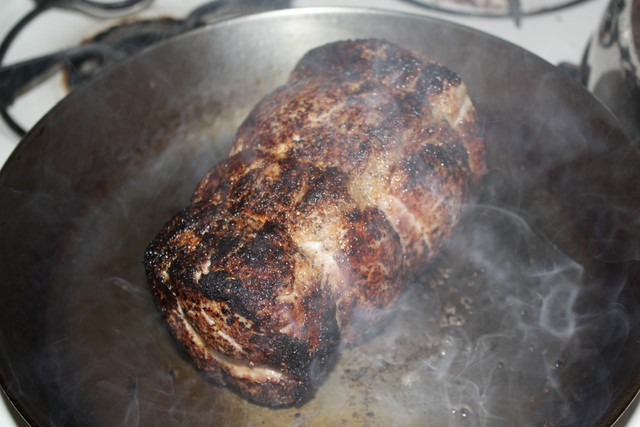 I need better ventilation in my kitchen (Nell Casey/Gothamist)

Now here's where things get a little wishy washy because, although it's known as the Other White Meat, pork doesn't have to be brutally incinerated to be safe for consumption. In fact, you can enjoy a tenderloin roast (as we are) or even pork chops at a beef-friendly "medium rare," aka an internal temperature of 145 degrees. I happen to dig my pork just shy of medium so I evacuate that bad boy when I get around 145 and then let it continue to "cook" while resting comfortably under an aluminum foil shield (for to keep out the aliens, natch). The pork doesn't dry out and it's juicy and delicious and god damnit stop being so squeamish.

Brown rice takes about twice as long as white rice, so you'll want to get going on that more or less when the pork goes into the oven. You could use water to cook your rice, sure, if you want to be boring about it, or you could use chicken stock because you are an adult now, capable of enjoying adult flavors. If you're using stock, add a little more liquid than the rice directions call for; as a general rule of thumb, you'll be using 2.5 times as much liquid (plus a little extra for stock) as you are using rice.

Now it's time to get glazin', so dump all of those wet ingredients into a bowl and whisk to combine thoroughly. Remove the pork from the oven and brush the meat with the glaze AIN'T NOBODY GOT TIME FOR THAT! Spoon the glaze over the meat and smoosh it around. Return to the oven. After 10 minutes have elapsed, flip the pork and repeat the glazing on the other side. Return to the oven. During the second glazing, check the internal temp of the pork. Depending on the size/strength/virility of your oven, the cooking time will vary, so I can't tell you exactly how long you'll be cooking the pork. Just know that whenever you remove the meat, the temperature will rise a few more degrees while you're resting the meat (YOU BETTER BE RESTING THE MEAT), so pull it out just shy of the doneness you want. 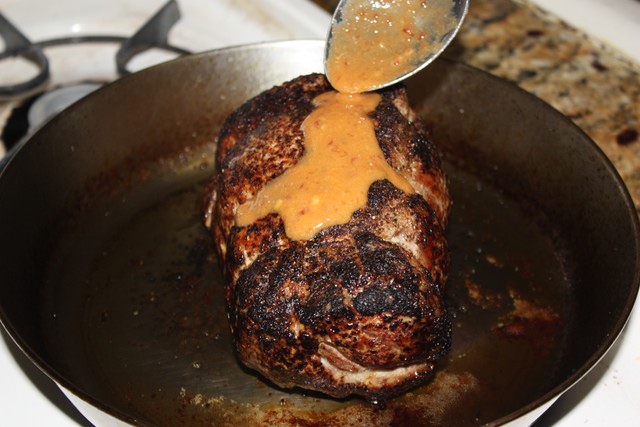 When you're getting close to pork oven removal, it's time to start sweating up some onions and garlic, because nothing makes green vegetables taste better than onions and garlic except perhaps also butter and cheese and cream but that's not the direction we're headed so stop drooling and get sweating! Set a pot over medium-low heat and pour in a few glugs of olive oil. Drop in the onions and let those bad boys get all nice and melty and translucent. When they're well on their way, drop in the garlic and heck maybe a few shakes of red pepper flakes if you're into that kind of thing. Let those get acquainted for 10 minutes or so, giving them a stir every so often. 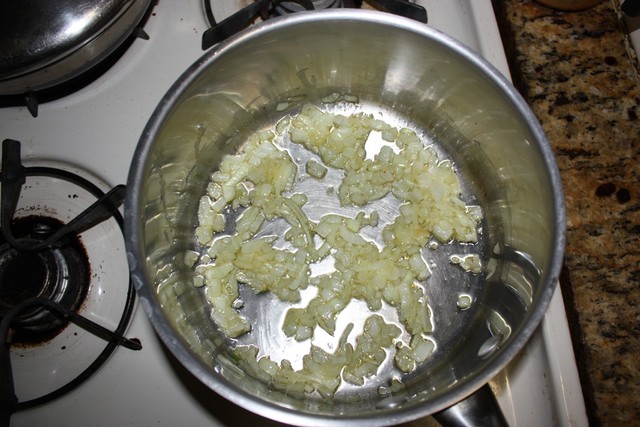 It's probably time to take the roast out of the oven and let it linger (yes you have to, yes you have to let it linger). Remove the pork from the pan and onto a plate/cutting board underneath some aluminum foil. It's time to make the gravy.

Put the pork pan on the stovetop over medium heat—keeping in mind that it was just in the oven and therefore the handle is HOT, a fact I conveniently forget every time I make this dish. There should be some residual vegetable oil in there plus some tasty brown bits from the searing process. These things are delicious and will be the base of this really easy gravy. Put the extra 1 cup of chicken stock into the microwave for 30 seconds or until it's hot. Throw a few spoonfuls of flour into the pan, whisk it a little and let the flour cook for 20-30 seconds. Slowly whisk in the hot stock, making sure to attack any lumps with the whisk. Once it looks smooth, crank up the heat until the mixture comes to a boil then lower the heat and allow the liquid to thicken. 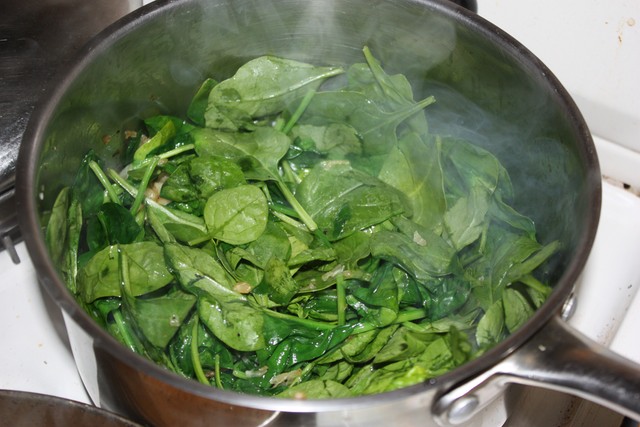 You really should be eating more vegetables (Nell Casey/Gothamist)

I hope you haven't forgotten about those onions and garlic and left them to languish and burn on the stovetop because now it's time to make some ridiculously tasty spinach, which you can't do if you have burned your base. Throw in the spinach with a few turns of freshly cracked pepper and a little bit of salt. It cooks down pretty quickly so get ready to kill the heat in a few minutes. Meanwhile, your rice should be done by now, so add in all that chopped kimchi goodness and stir to combine. The gravy should also be done, so finish with a tablespoon of butter and whisk to combine.

It's also time to check on your pork, which has had a lovely little sauna vacation and is now ready to be sliced and consumed, possibly directly from the cutting board you animal. 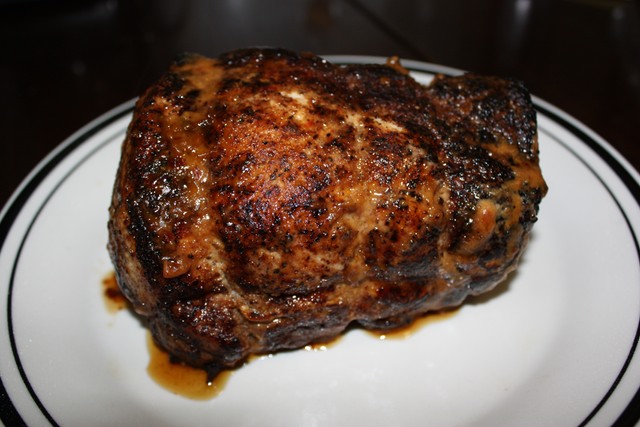 Spoon out the spinach and kimchi rice and garnish with scallion. Spoon gravy over the sliced pork (and the rice...and the spinach...gravy so good) and consume immediately, preferably with another Bushmills on the rocks. You deserve it, you chef you. 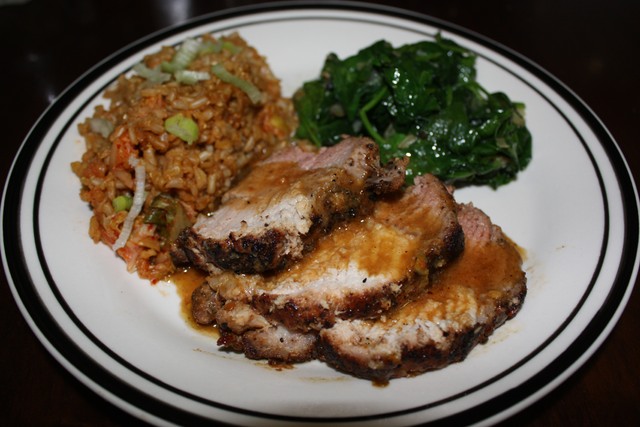