Make A Flaming Rum Omelette, "An Obscure Hidden Gem" From The 19th Century

Artist and writer Charles Green Shaw's "Bohemian Dinner" was recently republished at The Vault—part list and part poem, it quickly brings you through an evening in Greenwich Village in the 1920s, from the loose clothes and chemical wine, to the rum omelettes. 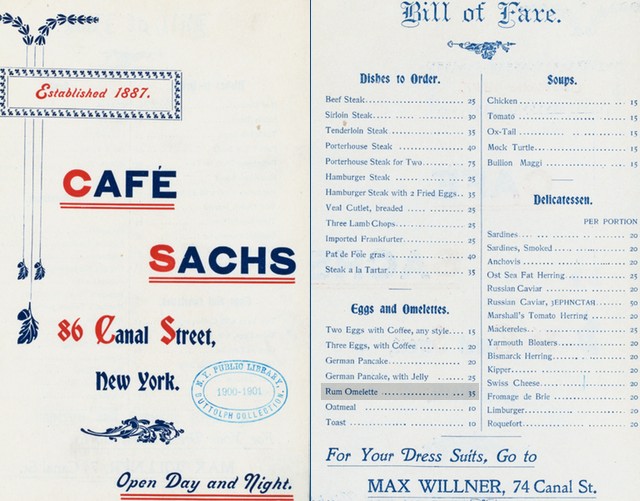 Courtesy of the NYPL

Rum omelettes appeared on many menus in the early 1900s, a little more expensive than the average egg dish. They're served in flames, and are said to have been favored "by gentlemen." In 2011 the NY Times referred to the dish as an "obscure hidden gem [from the] 19th century," but the rum omelette was still kicking around kitchens in the 1940s, when the paper called it "nothing if not impressive."

"Break five eggs in a basin, sweeten them with castor sugar, pour in a sherry glassful of rum. Beat them very hard till they froth. Put a bit of fresh butter in a shallow pan and pour in your eggs. Let it stay on the fire just three minutes and then slip it off on to a hot dish. Powder it with sugar, as you take it to the dining-room. At the dining-room door, set a light to a big spoonful of rum and pour it over the omelette just as you go in. It is almost impossible to light a glass of rum in a hurry, for your omelette, so use a kitchen spoon."

These days some suggest you pour the rum over the omelette while it's still in the pan, and ignite it there... but it looks cooler lighting it up on the serving plate: