Update, October 18th: In mid-October, a sign appeared on the front door promising a return. No other information was available, but it looks like a bakery will return to the storefront.

Maybe you didn't even know it was called Birdbath Green Bakery, or that it was owned by City Bakery (purveyor of the almighty pretzel croissant), but if you've walked along Prince Street you've undoubtedly spotted this charming old green storefront, still boasting signage from its previous incarnation, Vesuvio Bakery. This tiny slice of Manhattan looks delightfully old school and... almost Parisian? I've never been to Paris but I assume Paris is swimming in creaky old bakery storefronts like this, with peeled paint and stories to tell. But this is New York City, where nothing gold green can stay.

On Friday, City Bakery announced that this 160 Prince Street bakery, which they moved into in 2009, was now closed, leaving no time for long goodbyes.

Maury Rubin, founder of City Bakery, said in an Instagram post that he decided to move in "after Vesuvio's sat empty after the death of [unofficial Mayor of Greenwich Village] Anthony Dapolito, the 2nd generation of the family that created Vesuvio's in 1920." He, quite eloquently and emotionally, went on:

I remember the morning we opened like it was yesterday. I remember setting the counter for the first time. Placing the mini Statue of Liberty in the window and surrounding her with cookies. I remember the first customers in the door, and telling them that that's who they were. Now, close my eyes, count to 2019, and it's the end of the lease. Ten years or ten seconds? For a baker who loves bakeries, being given the keys to Vesuvio’s was a precious gift, like a violin player handed a Stradivarius—not just to hold—but to play. There are few places like Vesuvio’s left in New York, a sad, diminishing reality. To a bakery lover, it's an heirloom. To a New York lover, it's history.

We've reached out to Rubin for more information on the closing but he only reiterated that the lease was up. (It's worth noting other Birdbath locations have also been closed in recent years.) Currently, a sign on the door reads, in part, "Alas, our lease is up and our time in this magical place has come to an end. A heavy-hearted moment." 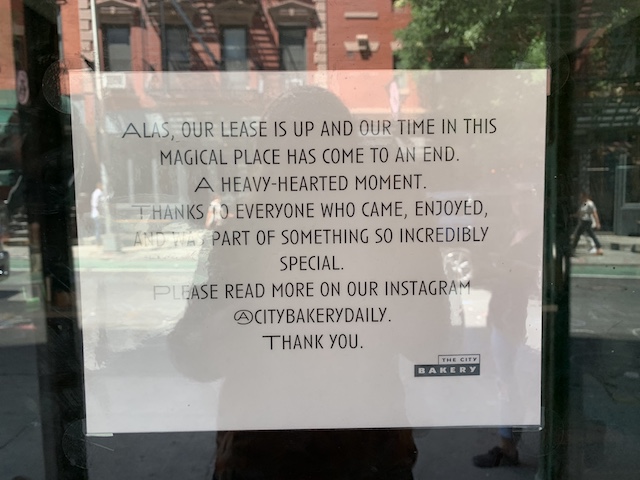 Rubin also noted on the Instagram post that when they moved in, he had no intention of changing the look of the space, "I simply wasn't going to be the schmendrick who desecrated a city landmark." And with that said, it's unclear what will happen to it now that it's out of his thoughtful hands, but the building still seems to be owned by the Korn family (according to the Dept. of Buildings site), who Rubin thanks in his post, noting they "cared about culture and legacy."

Back in 2009, when the previous owner departed the spot, the NY Times had reported, "One issue underlying these seemingly mysterious twists and turns is a dispute involving the bakery’s owners and the landlord of the six-story building whose ground floor the business occupied. 'My first choice would be to have continued on and have a historic bakery in a historic building,' said William Korn, a part owner of the building who lives in Colorado. 'That’s not how it worked out.'"

"Vesuvio's" is in a historic district, so any changes to the exterior would need to be approved by Landmark Preservation Commission. Kelly Carroll of the Historic Districts Council told us today that once it was landmarked (in 1973) any owner has had to seek permission to change it (but so far every owner has opted to keep the look intact).