Summer is dead; long live summer. If the eau de pumpkin spice scent burning a hole in your nasal passages at your local Starbucks didn't clue you in: fall is coming and, all too soon—like, WAY, WAY TOO SOON, winter. Before you settle into your Slanket for the season, note that there are still some outdoor markets heading our way, including Mad. Sq. Eats, the bi-annual market adjacent to Madison Square Park, opening on Saturday, September 2nd.

The market pops two dozen vendors into Worth Square, along with picnic benches and umbrellas for the late summer/early fall sun. Beer and wine are also available to purchase; vendors selling alcohol are noted with an asterisk in the full lineup below. 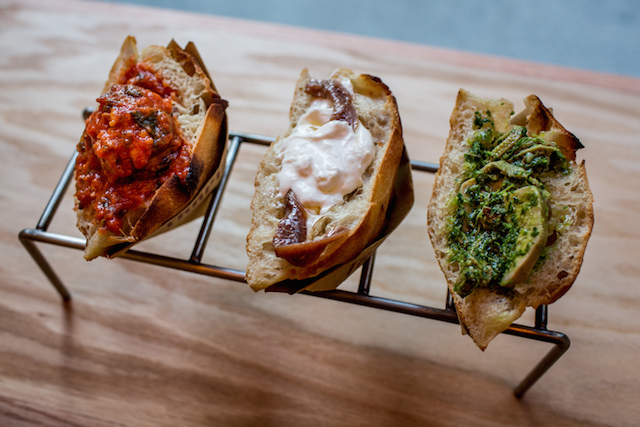 Hearty autumn eats courtesy of new vendors include the "fork-free" Chick'n Cone phenomenon; Daa! Dumplings, Russian dumplings (also served in a cone) in flavors like lamb & feta; and Trapizzino, the Roman bread pocket sandwiches that debuted in NYC earlier this year. There will also be salad.

Though we don't know exactly what they'll be doing just yet, Renegade Lemonade, superb ice cream slingers Ice & Vice, and Macaron Parlour are all teaming up for something dubbed "Renegade Vice Parlour." Ice & Vice has been known to make some pretty spectacular sundaes in the past...but looks like it may have something to do with alcohol, too.

The Urbanspace Mad. Sq. Eats is located at the plaza between 24th and 25th Streets, where Fifth Avenue and Broadway intersect, and is open daily from 11:00 a.m. to 9:00 p.m. through September 29th.

#mad sq eats
#madison square park
#outdoor markets
#original
Do you know the scoop? Comment below or Send us a Tip
A new Gothamist is coming! We’ve moved comments over to our beta site. Click here to join the conversation and get a preview of our new website.