Last year we went over a number of dishes believed to be lucky if eaten on New Year's Day—from grapes to okra to black-eyed peas and long noodles—but this year let's focus on the really sweet stuff. You may want to kick off 2013 on a healthy note... but you've got the whole year for that, and these desserts are believed to bring luck and good fortune to those who indulge in them on January 1st. 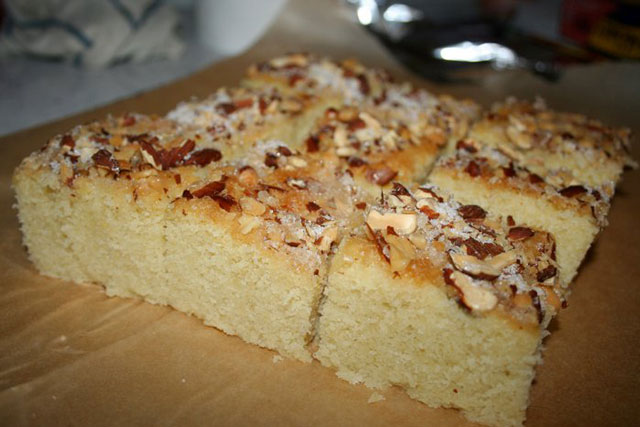 VASILOPITA CAKE: This was one we visited last year. The Greek cake is simple, but the twist is it's baked with a coin hidden inside. According to tradition, the person who gets the coin will be blessed with good luck entering the new year. There are different variations of the recipe around—some include fresh squeezed orange juice, orange zest, or Brandy. But whatever you do, bake a round one for extra luck (it seems to be universally believed that ring-shaped things are lucky to eat on New Year's Day).

DOUGHNUTS: Since ring-shaped foods are good luck, many countries turn to the doughnut on New Year's Day, including Poland, Hungary, and the Netherlands. And in Holland they serve an oliebollen—a puffy, doughnut-like pastry filled with apples, raisins, and currants. If you don't want to bake your own, at least get a quality doughnut—try Dun-Well or the Doughnut Plant.

KING CAKES: King Cake season lasts from The Epiphany (January 6th) through Mardi Gras, and while the ones out of New Orleans may be covered in colorful frosting, the purists in France offer up less of a Bourbon Street vibe with their galette des rois. (And yes, people eat these on New Year's Day, too.) The cake consists of puff pastry, almond filling, and has a small prize hidden inside. Don't want to make your own? Last year Grub Street had some suggestions on where to buy them in NYC (we'd add Le Pain Quotideien to that list). And here's a recipe if you're feeling ambitious.

CHIACCHIERE: In Italy, there's chiacchiere! They aren't always round, but are often rolled into balls. And ideally, for New Year's Day, they are fried dough balls rolled in honey and powdered sugar and sometimes even prosecco.