Lox Lens: Appetizing Shops In NYC, Then And Now

Of all of the many, many foods representative of New York City, perhaps none have remained so deeply tied to tradition than appetizings. Not appetizers, mind you—appetizings (noun), from an appetizing shop—things like smoked salmon, cream cheese spreads, and salads; or, as Wikipedia puts it, "the foods one eats with bagels." They arrived in New York with the huge wave of Jewish immigrants in the early 20th century, and owe their strange name to a kosher dietary law stating that meat and dairy can't be eaten or sold together. As a result, two different types of food stores cropped up: delicatessens (delis), which serve pickled, cured and smoked meats, and appetizings (appys), which handled the fish and dairy goods. 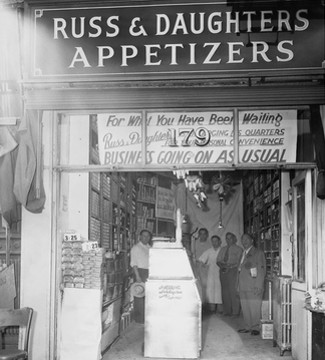 Between the nineteen-teens and the '60s, there were appetizing stores in every borough and in almost every neighborhood. On the Lower East Side alone there were, at one point, thirty appetizing shops, according to the grand dame of the city's establishments, Russ & Daughters on Houston Street, which has been in business since 1914 and is perpetually packed with a mix of longtime New York customers and tourists. For further evidence of appetizing's golden era, check out Milton Glaser's "Gentile's Guide to Jewish Food: The Appetizing Store," published in 1968.

Appetizing shops competed for supremacy in fish, above all else: customers, mainly Jewish until recently (more on that later), are fiercely picky and intensely loyal to the purveyor they believe has the best smoked or cured salmon (lox), whitefish (golden-skinned and smoked whole), and silky, creamy sable (aka black cod). Cream cheeses and salads—whitefish, tuna, salmon—were also the subjects of much debate, as were nostril-and-artery clogging spreads like chopped liver and pickled herring. Provoking less passionate opinion but still an integral part of the appetizing experience are the dry and baked goods—dried fruits and nuts and Jewish pastries like babka cake and rugelach.

Today, appys have become significantly less widespread, and the audience who shops for appetizing has changed dramatically. "I would say 20 years our clientele was predominantly Jewish and a much older clientele as well. It was usually older people buying these foods for their family or for important life events," said Niki Russ Federman, the owner of Russ & Daughters. "But with the changes going on in the Lower East Side, and, I would like to think that now with a younger generation at the helm—my cousin Josh and I are the fourth generation and we're both in our thirties—I think it's been given another boost of energy and youth. The people who come to Russ & Daughters now range from every age group, socioeconomic level, nationality and religion. Appetizing is not just a Jewish thing anymore. It's become a quintessential New York food," she says.

The 98-year old store has evolved with the times, too. While most of the shop's products are classic foods they've been carrying and specializing in for generations, the new breed of customer has led to the introduction of a few new items as well. One example: sandwiches. "Traditionally, an appetizing store was never a place that you'd go to for a sandwich," says Russ Federman. "In origin these foods were purchased as separate items and taken home where people would put out a spread. But the idea of getting your smoked fish on bagel to go to eat on the bench in front of Russ & Daughters is a new thing. We have a younger clientele, people who are visiting. People just want to get their fix without having to make a big deal out of it." 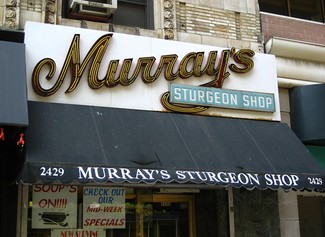 Ira Goller, the owner of Murray's Sturgeon Shop on the Upper West Side, agrees. The store has been open since 1946, and though Goller himself isn't a Murray family member, he grew up in Queens eating appetizing before buying the business in 1990. "When I came there, it was probably 93 percent Jewish customers," he says. "I’d say now it’s 75 percent or even less." His sentiments on the shift echo Russ Federman's: "What happens is that bagels, lox and cream cheese have become standards now, like pizza. You can get a bagel and lox and cream cheese in any supermarket, any bagel store. It won't have the same quality as we have here, but you can get a standard version anywhere." He insists on still doing things the old-fashioned way—pickled herring and schmaltz herring, for example, are barreled in-house, a labor-intensive process that he maintains because "it still gives it the best taste."

And yet, despite the perception that appetizing shops are all historic relics, there is a small market opening up for a new wave of next-generation appys. The Wall Street Journal has noted the nouveau Jew food trend nationwide, but they missed one of the best examples, headquartered in the unlikely (read: not historically Jewish) neighborhood of Carroll Gardens: Shelsky's Smoked Fish.

Shelsky's opened in a prime Smith Street storefront this summer. It's run by Peter Shelsky, a Jewish boy who describes himself as "gastronomically observant" and boasts a decidedly non-kosher tattoo of a pig on his forearm. He grew up in the city, making regular weekend trips to the Lower East Side to eat Kossar's Bialy's and Russ & Daughters fish with his grandmother. After cooking non-Jewish food in professional kitchens for years, he was finally looking for a storefront of his own. "I noticed that there were all these small specialty shops in my neighborhood [Carroll Gardens], but no appetizing store. As soon as I thought about the food I grew up with, it was so obvious," says Shelsky of his decision to turn the space into an appetizing shop. He taught himself how to slice the paper-thin fish, most of which he cures in-house, in only-in-Brooklyn flavors like clementine and ginger (the names of his two daughters) and Mexican achiote.

Some of his customers have never seen whole smoked chubs or marbled halvah bars, so Shelsky, like any appetizing proprietor worth his weight, offers sample after sample of his wares, handing out slices of fish and spoons full of still-warm chopped liver (made with Meat Hook duck fat, no less) like candy. All three appetizing store owners interviewed for this article emphasized that they love to talk about and provide tastes to customers new and old. "Taste is the easiest introduction to appetizing," says Russ Federman. And if you've never tried Gaspe nova smoked salmon or herring rollmops, you're not alone, she adds: "There is definitely a lot of excitement and interest in exploring these foods right now." What are you waiting for? Go on, try it—you'll like it.