Our latest installment of Quick Bites brings us to the West Village for North Africa cuisine.

THE VIBE
Diana Tandia is the owner, chef, counter-worker, server, busser, and occasional tea-pourer at her delightful new cafe in the West Village, Berber Street Food on Carmine Street. "Berber" refers to the indigenous peoples of North Africa. Tandia, who hails from Mauritania, offers an impressively lengthy menu of snacks, sandwiches, bowls, and entrees, all redolent with the foods and flavors of her upbringing.

Berber Street Food is a small, counter-service restaurant with proper tables for about six to eight people (including a prized window booth) and some stools before a cluttered counter facing the wall. These latter seats seem perilously close to what will almost certainly be a line of people waiting to order, once word gets out just how good this place is. That said, Tandia brings an enormous amount of warmth and character to the space, filling it with vibrant colors, cushions, and collections of photographs, baskets, and tagines. 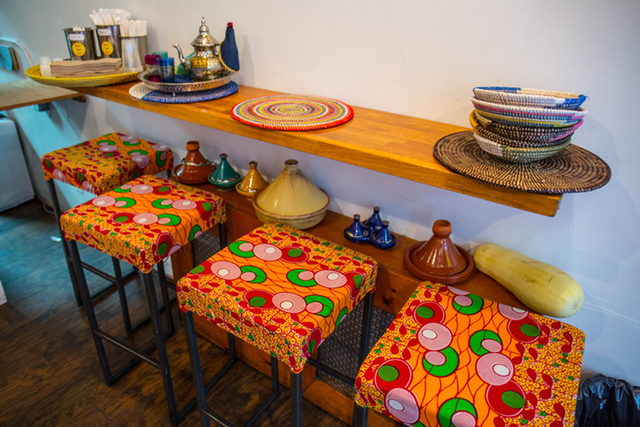 Tandia has spent time working both front and back of the house at several high-end restaurants (Gramercy Tavern, Daniel, Per Se), and though this venture is anything but stuffy or fussy, she is a gracious, patient, thoughtful host, and there's a certain elegance to the proceedings here, even when you're just being served a stack of meat skewers or a big-ass sandwich.

THE BITES
Everything I've eaten at Berber Street Food has been terrific, and I can't wait to go back and try some more things. If you want something fast, full-flavored, and filling (and inexpensive!), order an Afro-Fusion Express Bowl, for which you choose your base (the Turmeric Fried Rice was sticky and delicious), two sides (she gave me three: soupy Black Eyed Peas, sweet and soft Fried Plantains, and crisp green beans and cabbage), and a protein (the Backyard Jerk Chicken is tender, with a kick). This is a complete meal with lots of different things going on for only $10.

The sandwiches are also all amply proportioned, if my Sahara is any guide. Structured like a gyro on oily, rolled flatbread, this monster was packed with lamb kofta, which are like heavily seasoned, incredibly juicy meatballs, as well as crunchy cucumbers and generous squirts of both harissa sauce and beet tzatziki. You can also order the Kofta Meat Balls as a "street food bite," but then you'd be missing the Suya Brochettes, Tandia's Nigerian sirloin skewers that are so funky and meltingly tender they eat almost like liver.

There are entree-like House Specialties too, including the excellent Berber Feast, a wobbly pile of chopped leg of lamb served on a sheet of brown paper with three intense sauces, sweet caramelized onions, and some decent couscous. Don't forget to suck out the marrow on these beauties. The Marrakech Vegetable Tagine arrives in appropriately dramatic fashion, with two fat peppers hidden beneath the lid. These are perfectly prepared, sweet and soft-but-firm, stuffed with couscous, and sitting in the intense, reduced vestiges of a turmeric cooking sauce. It's seasonal, so you may not get the peppers, but you will get something good.

THE VERDICT
Lovely and delicious, in both concept and execution, with everything priced several dollars less than you find at most new neighborhood spots. A big welcome to Tandia and her food to Carmine Street.

Berber Street Food is located at 35 Carmine Street between Bedford and Bleecker Streets, and is currently open WEEKDAYS ONLY between noon and 9 p.m.
(646-870-0495; berberstreetfood.com)