In a twist from their traditional lobster and seafood rolls, Luke's Lobster has debuted the latest of the crustacean innovations with the launch of Luke's Tail Cart, a new kiosk that's officially open in The Battery. Instead of lobster-stuffed bread, the stall will offer a singular snack: lobster on a stick.

More specifically, lobster tails skewered and grilled over some fire. The tails are split down the middle for cooking—and ease of shell extraction—and served with either a warm drawn butter scented with lemon or a blueberry balsamic made with berries from Maine (when in season). Regular grilled lobster tails (5 ounces) go for $6 for one skewer (the full tail) or $11 for two skewers (two tails), while the large tails (8 ounces) go for $10 and $19. By comparison, the lobster rolls at their other locations go for $16. 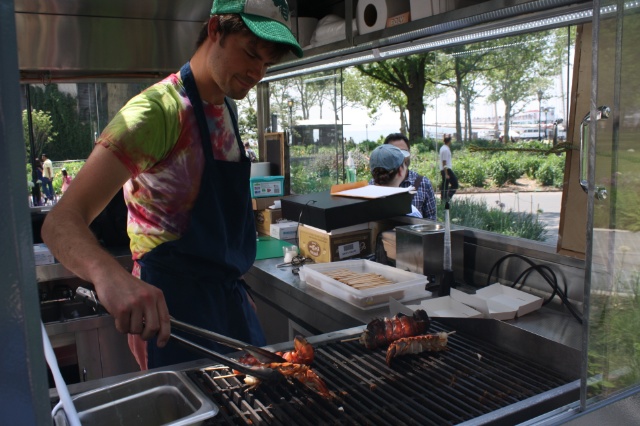 The cart'll be open daily from 11:30 a.m. to 7 p.m. and it'll also serve some seasonal drinks and small desserts. Since the tails are super portable thanks to the sticks, you can take them on a ride on the Seaglass Carousel, which is right next door.