"I like to put things on the menu that I crave so that I always have something when I'm like, 'Oh I didn't eat today!'" laughs Shanna Pacifico as we sit in front of a table hidden beneath plates bearing pimento cheese-lacquered burgers and mini cast iron skillets stacked with crisp pieces of fried chicken. Pacifico has recently signed on as the new head chef at Extra Fancy, the Williamsburg haunt known for its seafood-centric menu and late night attributes.

Prior to her current kitchen, the chef was leading the charge at Greenpoint's Cozinha Latina, celebrating her Brazilian-American heritage with fresh and flavorful dishes the food world was buzzing about (the restaurant's owners have since reverted the space back to a boring bar, much to the neighborhood's detriment). So what's she up to now? Lobster Bisque Fries, for one thing.

"I have this idea that people are interested in and flock to fat kid food—and then who doesn't like poutine or disco fries?" Pacifico says of the inspiration for the centerpiece entree of the recently launched brunch. The restaurant's popular lobster roll meant a backlog of lobster shells, which create a rich lobster stock; that's when Pacifico's creativity came into play. "How do we use the lobster bodies from the lobster rolls in a way that's not just putting lobster stock or lobster bisque on the menu?"

The dish—which one can acquire at brunch for $18 or as a special on occasion during the week—boils down to a mound of thick-cut fries doused in a savory lobster bisque, held captive in a ceramic dish. On top, a liberal scattering of lobster meat, including tender hunks from the claw. In the middle a poached egg, waiting to be pierced, and a final few spoonfuls of cheerful tobiko, flying fish roe. Decadent, dangerous and wholeheartedly delicious. 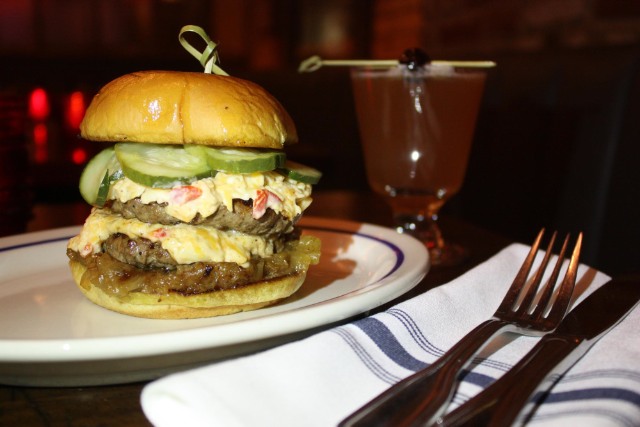 A revamped brunch program isn't the only thing Pacifico's new reign has ushered in. Some menu items—like the restaurant's popular deviled eggs—are staying put, but there's been some changing and expansion in other areas of the menu. The signature late-night patty melt may be eclipsed by the new DBL Patty Cheeseburger ($15), a messy, beefy stack of two patties glued with pimento cheese, pickles and caramelized onions on a Martin's potato bun.

Her Extra Fancy Fried Chicken ($14), perfumed with fried garlic and red onion and fresh chopped herbs, employs a corn starch batter that crisps up the skin without weighing down the entire proceedings. The Extra Fancy Hot Sauce, which they're hoping to bottle and sell at some point down the road, is her twist on a piri piri sauce and adds a bright accent to the dish without setting anyone's mouth aflame. On the milder end, Clam Chowder Croquettes ($8), a nod to some of the New England notes that play out on the menu.

Come spring, the restaurant will open up a large, new outdoor section that'll mean more opportunities for ingenuity and playing around with food. She wasn't ready to talk specifics, but Pacifico's aiming for some fun finger foods that'll set them apart from the rest. "New York is completely saturated with restaurants and it's not necessarily how you stand out, it's just...why are they going to want to come here, and not there? And you know, if you try to do something a little differently, hopefully that helps."