Last month some 25 different restaurants, cafes, and food shops opened almost simultaneously in the gigantic mall at Hudson Yards which, if nothing else, was a singularly impressive feat of logistics. Among the most eagerly anticipated of those, in the large-bank-account bracket, was Wild Ink, the first American venture from the London-based hospitality group, Rhubarb.

Wild Ink does arrive with some instant NYC cred, with the one-time Momofuku wizard Tien Ho (at Ssam Bar and Ma Peche) overseeing Rhubarb's US operations, including menu development here on the mall's fifth floor (and, in 2020, in whatever they're doing to feed people up in the complex's observation deck, known as The Edge). Wild Ink's day-to-day executive chef, Peter Jin, also has experience here in the city, including a stint at Hotel 50 Bowery.

The basic cuisine is what they're calling "Asian-inspired, with an international approach," and during a special press dinner earlier this week we had the opportunity to eat a large chunk of Ho and Jin's menu. At this juncture I should mention that Wild Ink is an expensive restaurant, where three dumplings can cost $15, and a half duck, no sides, will set you back $42. 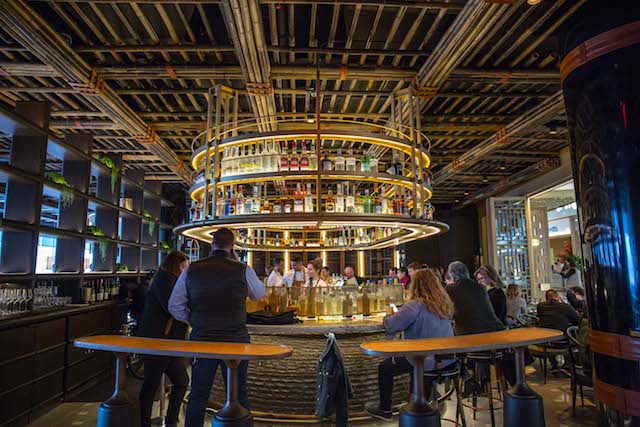 The Wild Ink menu seems designed to suit multiple dining (and drinking) needs, whether you're looking to snack on a few small plates with a cocktail or two at the expansive bar area, or settle in for a multi-course dinner downing bottles of wine in one of the exceptionally comfortable rounded booths in the dining room. It's all very appealing, stacked with familiar crowd-pleasers given an interesting twist.

That old warhorse General Tso makes an appearance, for example, but here he's conquered a pair of sweetbreads. The best of the half-dozen dumpling varieties may have been the wonderfully funky Full English Breakfast, though the Curried Lamb Momo were also pretty stellar. That pricey duck is prepared in extra-zesty fashion "a la kumquat," instead of boring old orange. And the surprise winner among the desserts we devoured was a decadent Miso Custard Tart.

There are crudos and a tartare in the Raw section (the Vanilla Cured Salmon is delicious), Small Plates like Seared Diver Scallops and a lovely Radish and Pecorino Salad, and Snacks such as a delightfully spicy Crispy Calamari. Main Plates include the kumquat duck, Japanese Risotto, and a show-stopping Roasted 20 oz Creekstone Bone-In Ribeye with a mid-sized pond's worth of amazing Marmite Hollandaise. 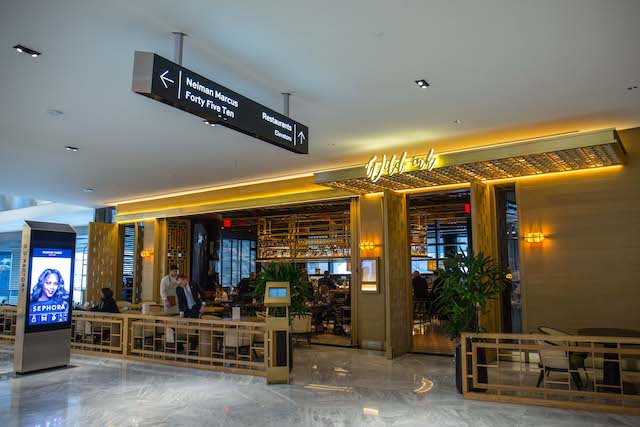 The trickiest part of opening a high-end restaurant in a mall, especially one that also aspires to be something of a party spot, is that... well, it's in a mall. But while there's no mistaking that fact as you wind your way up to the fifth floor, zig-zagging through escalators and somewhat depressingly empty corridors, Wild Ink does an excellent job of making you forget all that once you're inside.

The first thing you notice, of course, is the dramatic view of Vessel through the wall of windows running the length of the dining room (time your meal with a spectacular sunset for added pyrotechnics). There are plush banquettes snaking across the tiled floor, a chef's counter set before the large open kitchen, and a raw, industrial look to the whole space, which comes via Robert Angell Design International, out of London. If you get one of the big tables you'll find a large marble lazy susan in the middle, which is fun for both sharing and gratuitous spinning.

The entire front-of-the-house team is notably exceptional, the type of ninja service that appears out of nowhere at the exact moment you need it, then quickly recedes into the background. I guess you should expect that kind of professionalism at these prices, but it's nice to know that some of your money is going to the salaries of Wild Ink's small army of able staffers.

#hudson yards
#tien ho
#wild ink
#original
Do you know the scoop? Comment below or Send us a Tip
A new Gothamist is coming! We’ve moved comments over to our beta site. Click here to join the conversation and get a preview of our new website.