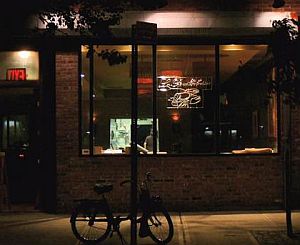 La Bouillabaisse, the small red brick restaurant with a neon lobster hanging in the front window and pitted across the street from the monolithic Red Hook IKEA, had a soft opening on Friday night. Regular hours commence later this week.

Like a Neil Diamond set list, the menu is an intentionally predictable group of standards, like poached pear with gorgonzola, and bowls of garlicky bouillabaisse. In fact, it’s an exact facsimile of the menu Ganic served at Bouillabaisses 126 and 145, the two prior incarnations of his restaurant. Entrees ($14-21) include plates of steamed mussels with garlic and crushed tomato, and seared diver scallops with mashed potatoes and green beans. Ganic says he’ll alternate between filet mignon and veal chops as a meat option, and otherwise base the fish-heavy menu in provençal-style food, which means a surfeit of tomato, garlic and thyme, and not a lot of cream sauces. Diners can request fries (for moules frites) from the bar menu of Annabelle’s next door, which Ganic also operates.

Last week, in the dining room of his other diminutive Brooklyn restaurant Petite Crevette, the Croatian-born chef-owner recalled his culinary training. A picture of Ganic standing with a strung-up striped bass hung over a table. Also on the wall: a b+w of the toque-wearing Ganic standing next to a beaming Liza Minelli. Ganic explained that he worked on ships – “cargo ships, passenger ships, fishing ships” – before landing in New York, where he trained under a number of French chefs in the 1970s. When he was twenty-something, he became the youngest chef ever at legendary nightspot El Morocco when a predecessor “cut off his hand in a Robot Coupe accident.” Ganic opened the original La Bouillabaisse in 1993. “There was a tremendous demand for chefs in the city at that time,” said Ganic, “but I decided to open in Brooklyn. People thought I was crazy.”