Little Jerry Seinfeld, the practical joke chicken that Tim Brydak bought to rally his teammates, was purchased from a Chinatown market for just $8. But today, he's heading to Farm Sanctuary in Watkins Glen, NY for a life without fear of being someone's dinner.

The chicken, originally named "Little Derek Jeter," has been cared for by Lower East Side resident, Mets fan and vegan Jeff LaPadula and his wife Tisa—the couple have been Tweeting about Little Jerry (Tisa: "I'm no Chef Theresa, but ‪#LittleJerry‬ is enjoying his breakfast in the ‪#LES‬! 1 day to go! @bumblelina1 @Givemethelefty pic.twitter.com/a5pfA0rL" and "‪#LittleJerry‬ says, "Let's Go ‪#Mets‬! And stop eating chickens!" I think he's serious. http://tryveg.com pic.twitter.com/xSmiCvp2" 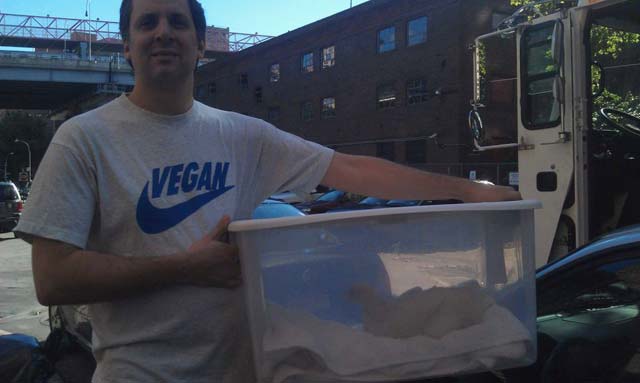 Jeff LaPadula, who likes Citifield's vegan veggie dogs, told DNAinfo, "It's just nice that they [the Mets] did the right thing after they bonded with this bird to save his life," and even though Little Jerry is nice and gets along with their dog, the chicken "is a little bit on the messy side. He's young and shouldn't eat much, but when he does it's a little messy and a little smelly." Wait, he sounds like lots of LES roommates!