The never-ending cupcake craze has finally morphed with the street vendor. Thanks to Lev Ekster's CupcakeStop Truck the treats are now mobile, just find him in his truck (which, if not here, he promises you can find via Twitter). He'll be bringing some flavor to our Northside Festival show's afterparty as well, so if this coming Saturday night you're looking for a midnight snack, you'll know where to find it.

How did you go from law to cupcakes? How did the idea for a cupcake truck originate? I spent a lot of late nights in the law library, and after leaving late at night, I often craved a snack, usually cupcakes. After the expeditions across town to get a cupcake and not being completely satisfied with the ones I was purchasing, this idea came about; quality cupcakes and the convenience of mobile food vending.

What has the reaction been so far? The reaction has been very positive. We've received many compliments and plenty of repeat customers, which makes us very happy!

What is your favorite cupcake? Personally, my favorite is the Oreo Crumb, but the Coconut is a close second.

If not cupcakes, what else would you serve? That's a tough question to answer; I'm very loyal to cupcakes. Whatever it would be, it'd have to be delicious, moderately priced and convenient to acquire. 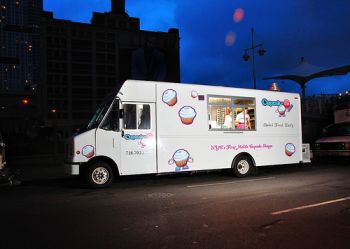 Are there any new recipes in the works? Yes, we're now adding May's new flavor suggestion, which is Key Lime, and some others that are confidential for now.

Please share your strangest "only in New York" story. I once saw a pedi-cab guy riding his bicycle down 6th Avenue wearing bike shorts and angel wings.

Which New Yorker do you most admire? Spider-Man! I'm a Bloomberg fan.

Given the opportunity, how would you change New York? That's also a tough question. I'm sucha fan of NY that I can't think of too many negatives to change. I'd love for NY to issue more mobile food vending permits so I could put more CupcakeStop trucks on the road!

Under what circumstance have you thought about leaving New York? I've never considered leaving New York. I left NYC for 4 years during college to Ithaca, NY, but I visited every chance I could get.

Do you have a favorite New York celebrity sighting or encounter? Michael Imperioli would park as the same parking lot near my law school and I would see him regularly which was cool because I was a big fan of The Sopranos.

Best cheap eat in the city. CupcakeStop. Sorry the shameless plug. I also like Mamoon's in the Village.

Best venue to see music. I saw Kanye West, Lupe Fiasco and the Neptunes at Madison Square Garden which was great.

#cupcakes
#CupcakeStop Truck
#interview
#Lev Ekster
Do you know the scoop? Send us a Tip
A new Gothamist is coming! We’ve moved comments over to our beta site. Click here to join the conversation and get a preview of our new website.