Let's Watch A McDonald's McRib Get Made

McDonald's is still struggling to turn its clown frown upside down amidst accusations of wage theft and incredible tone-deafness. Its latest attempts at brand reinvigoration have taken to task "rumors" that the chain's foodstuffs aren't what they claim to be; namely, that they're super-processed filler meats devoid of any "natural" ingredients. None of their menu items has taken more heat than the polarizing McRib product, which achieved viral fame after images of the frozen product surfaced on the web.

To combat the negative imagery, McDonald's has released a new Behind The Scenes video that purports to show the origin story of the formed meat product. In the video, you'll see beautifully marbled hunks of pork—"no bones, no gristle, it's all meat"—before, during and after their trip into the grinder. The video also shows the addition of seasonings and preservatives, specifically BHA (butylated hydroxyanisole), propyl gallate and citric acid, to "lock in the flavor," the chain blandly intones. 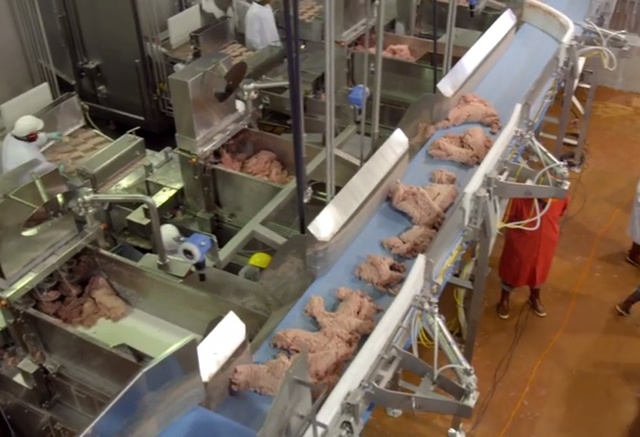 To hear them tell it, it's all Just Like Grandma Used To Make, only on a larger scale. Sure, if Nanna used preservatives that "may contribute to carcinogenicity or tumorigenicity" (BHA) and are banned in other countries (propyl gallate). And what about the other numerous ingredients, like the Yoga Mat material azodicarbonamide in the buns and the "scalded stomachs" that bulk up the patty itself? That must not have made the final edit.

As you can see, the video conveniently starts at the factory, after the millions of pigs who give their lives for this product have already been slaughtered. Convenient timing for McDonald's, as one of the chain's producers has been accused of animal abuse at the factory farm where the pigs come from. Smithfield Foods has been sued by the Humane Society for the use of "gestation crates," which left sows with "open pressure sores" and resulted in premature piglets falling through slats in the floor and being left to die in manure pits below—among many other things.

But yeah, sure, just another fun day at the McDonald's plant. Nothing totally disgusting or unethical to see here.

#ads
#fast food
#mcdonald's
#mcrib
#pork
#publicity stunts
Do you know the scoop? Comment below or Send us a Tip