Around the world, night markets and bazaars are cultural institutions, where people of all ages and backgrounds can eat, drink, buy goods and share a communal experience. We have something similar in the Smorgasburg/Brooklyn Flea events and the indoor Brooklyn Night Bazaar, yet nothing that rivals the scope and diversity of an international night market. But if one corporate lawyer-turned night market champion successfully funds his Kickstarter, that may change.

John Wang began his quest for the Queens International Night Market a year ago when he left the corporate world to make the night markets of his travels a reality in NYC. "Markets can serve as gateways to different cultures, and a market with diverse participation can serve as an accessible bridge for cultural exchange," he explains. "And let's be honest, they're really a lot of fun, and filled with tons of great food and art." His proposal: begin Saturday night markets at the NY Hall of Science in Flushing Meadows Corona Park, running from the end of April through October.

"Whereas existing night markets tend to be fairly monothematic, reflecting one or only a small set of cultures, NYC is uniquely positioned to support a truly international, multicultural, and inclusive affair," he says. "And Queens, as the most ethnically diverse area in the world, is the perfect place for it." The market would feature over 100 independent vendors, spanning food to art to merchandise, plus musical performances that reflect the city's and borough's "rich cultural and ethnic diversity."

"This means you can expect to find affordable and casual street foods you might not see at other markets," Wang promises. "Think steamed buns, pupusas, shaved ice, momos, noodles, jerk chicken, banh mi, arepas, takoyaki, skewers, and so much more." 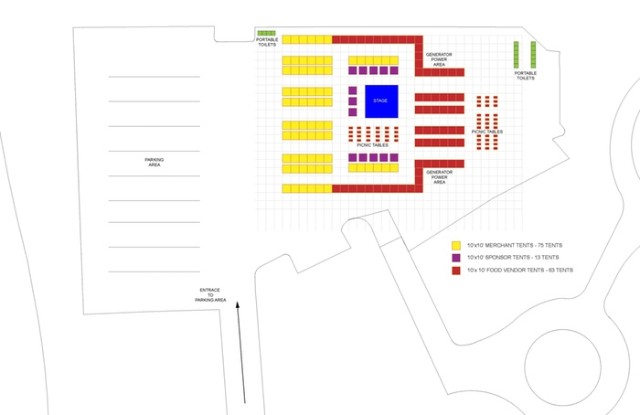 Conceptual Layout of the Night Market

According to Wang, the market will cost over $10,000 per night in production fees, including permits, venue rentals and equipment, which was why he turned to Kickstarter. He's hoping to raise $100,000 in a little over a month and use the money to not only fund the event itself, but also to subsidize vendor fees "to focus the experience on culture, diversity and community." The money would theoretically fund the first five dates, after which Wang hopes they'll have enough interest from sponsors and other parties to fund a full season and beyond.

Beyond funding, there are other issues that could prevent the market from happening, just like the original Brooklyn version. Though he's already met with politicians, community leaders and other important collaborators, there's always the chance that his dream will be squashed before it comes to fruition. Other issues, like accessibility via the 7 train, the logistics of transporting massive amounts of goods and people, plus Mother Nature also stand in his way. But Wang seems confident that with the funding, plus interest from the community, the market can be a success.

Head over to the Kickstarter page for more details about the market and to make a pledge.

#kickstarter
#queens international night market
#original
Do you know the scoop? Comment below or Send us a Tip