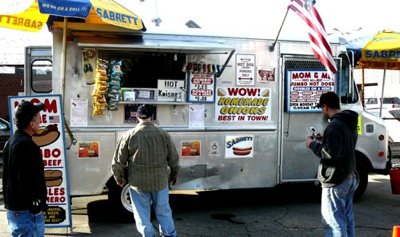 Few have noticed, and perhaps less care, but there aren’t too many hot dog shacks or trucks left in the city. Despite the recent success of relatively fancy dogs topped with everything from kimchee puree to avocado mash, a few legendary hot dog outposts still exist in the far reaches of Brooklyn and Queens, tucked away on corners near scrap metal dealers and steel-frame towers of junked cars. These are the kinds of places where actual truckers wear trucker hats, and the hot dogs are functional, never showboats.

First up is the Nathan’s that never was: Coney Island Joe’s, now closed. Though never much more than a tiny yellow and red cinderblock shack, Coney Island Joe’s specialized in a manwich-sized version of a regular frank, a legend in its time, or at least circa 1952, when the place first opened. Joe’s drew crowds with a variant of the elusive “double dog”- 2 hot dogs served on a hunk of baguette, a maneuver rarely attempted in New York; a dog some say is best left to New Jersey. The loaded, self-service fixins bar at Joe’s was equally famous, offering up sour pickles and hot peppers. All this is now gone. The abandoned Coney Island Joe’s is fenced in and shuttered; the sprawling Linden subway car repair shop currently dwarfs the small building, crowding it with its own barbed wire fencing. 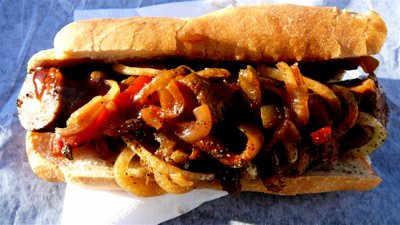 Farther down Linden Boulevard on the borough border, next to a gas station at 79th Street, is Policano’s Italian sausage truck. A standard issue all-beef hot dog (grilled) with owner Doug Pelicano’s signature peppers and onions (finished with a liberal sprinkle of lemon pepper) goes for $2. Policano’s “house specialty,” however, is the $7 sausage sandwich topped with the same onions and peppers. Like any respectable hot dog vendor, Policano’s sells a full range of Dr. Brown’s sodas, and reserves the right to refuse service. The latter is printed on a sign inside the truck.

Parked down the road from the Brooklyn Terminal Market is the Mom & Me lunch truck. It has all the telltale markings of a regular hot dog truck: Grumman step van, Sabrett umbrellas, wafting smell of sauerkraut. But pay attention to the subtle sign affixed to the vehicle in different locations. WOW! it reads, HOMEMADE ONIONS! BEST IN TOWN! The onions are in fact made every day, cooked down with some chili sauce and a little sugar. Two jumbo hot dogs (simmered, jumbo, natural casing) with mustard and Mom & Me’s signature Coney Island style onions cost $4.50; a double dog on Italian Bread in the gentle spirit of workaday Coney Island Joe’s with choice of condiments goes for $5. 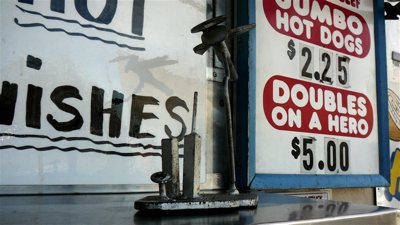 Yesterday, we saw a small sculpture in the shape of the twin towers (with a hovering steel angel, and a fireman on the ground) made by one of Mom & Me’s regular customers; Mom’s owner keeps it on a shelf next to the napkins and hot sauce by the service window. “This guy never says nothing to nobody,” one of the customers said. “He’s got two left feet, and then he turns around and makes this thing outta spare parts.” He laughed and took a bite of his hot dog. “Who woulda thunk it? That thing belongs in a museum or something.” 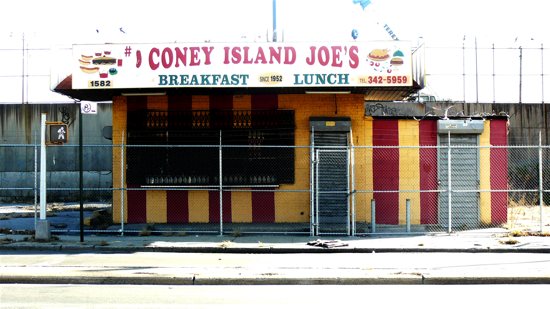