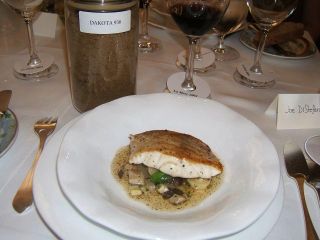 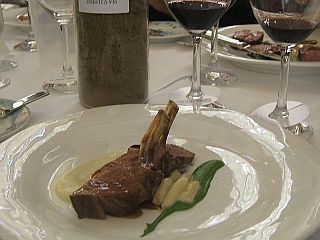 We love fine dining as much as the next gourmand, but there’s something about fancy French restaurants with their retinues of waiters, sommeliers, captains and bread sergeants that we find slightly offputting. Upon arriving at Last Thursday’s tasting of Vérité wines at Bouley we were in a bit of tizzy, not because of our issues surrounding Le/La/Les establishments, but due to our walking in some five minutes before vigneron Pierre Seillan’s speech ended. This gaffe was largely due to our looking for the restaurant on Broadway instead of West Broadway. In retrospect, this may not have been a bad thing, since the hourlong vertical tasting of three wines started at 11:30 a.m. In order to do it justice, Gothamist would had to have sampled 21 wines, or vintages from 1998 to 2004 of each red on offer, all on a relatively empty stomach. Besides as Seillan, the creative force behind the acclaimed Sonoma County winery, graciously pointed out, our lateness allowed the wines to open up a bit more.

As you can see from the jar of soil on the table, Seillan is quite serious about terroir, the vineyard's physical elements including the vine, subsoil and climate. He even takes it one step further by selecting individual rows of vines that possess distinct profiles. The self-proclaimed "terroirist" has termed these rows micro-crus. Surely everyone who ever brushed elbows with a wine geek has heard the term grand cru, but micro-cru? Who knew?

Our favorite wine of the afternoon was the 1998 La Joie, which was full of big fruit, thanks largely to its 70% ratio of cabernet sauvignon blended with merlot. Seillan expects the fruit to become even more exquisite if this wine is laid down for 10 years. We can hardly imagine. A fellow at our table kept raving about the 1999 La Joie. To our palate it had a bit too much of a grassy, barnyard character. He suggested we give it a second chance and try it along with a bit of truffle-infused cheese and, voilà the fruit came shining through.

Pierre Seillan and his wife, Monique, were both charming and witty as they detailed the story of how they came to California, including how the two spent their first six months weathering the rains of El Nino in 1998. Pierre had a wonderful way of demystifying wine for nonoenophiles. When speaking of the often arcane appellations of high-end French reds, he quipped, "Nobody understands that, even the people from Bordeaux. What do they understand? Good wine in the glass."

By now we've kept you in enough suspense about the food. The first course was a black sea bass with fall vegetables in a black truffle dashi. The second was an organic Colorado rack of lamb with home-made sheep milk ricotta gnocchi, fresh sage and zucchini mint purée. As much we loved the lamb, the fish with its crisped skin and succulent white flesh was our favorite.