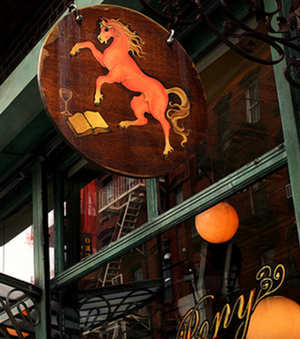 Ludlow Street is seeing some sweeping changes this year. So far word on the street has a SoHo House opening up; Piano's expanding; and the Living Room moving elsewhere. The latest blow came this morning when Bowery Boogie reported that mainstay no-frills eatery Pink Pony has closed indefinitely.

"The pioneering Lower East Side hang at 176 Ludlow closed a couple weeks ago under cover of darkness, seemingly not to return. Sources confirm closure, while calls for comment are met without success. Yes, the Pink Pony phone number was also disconnected. We all knew this day would eventually arrive, especially after the famed compromise of January 2011 in which a favorable rent deal was struck between the landlord and neighbor Max Fish, who subleased the adjacent restaurant space to Pink Pony. At that moment, the extension granted was only for a year so both were living on borrowed time."

When do we start a Lower East Side Deathwatch Pool for the remaining establishments in the area? At least Lolita is safe, for the moment.

#LES
#Lower East Side
#ludlow street
#pink pony
#rip les
Do you know the scoop? Comment below or Send us a Tip