Two's company but three's a crowd and so it seems that Dumbo's dueling pizza twins may soon find themselves united against a common enemy: a legendary Sicilian-style slice slinger from Gravesend. L&B Spumoni Gardens will reportedly be setting up shop directly across the street from Grimaldi's and Juliana's on Old Front Street, potentially escalating Brooklyn's longstanding culinary feud. Will these two nemeses unite to crush a competitor creeping onto their turf, maybe burying metal shards in Spumoni Gardens pies or sabotaging their daily operations by suggesting to the city that the new restaurant might be firing up illegal coal ovens and should be shuttered?

Anything is possible, but for now, the pizza bosses reportedly welcome the fresh competition.

"I think it's gonna be a pizza mecca over there—that would be great," Joe Ciolli, the CEO of Grimaldi's national chain—which recently subsumed its original parent restaurant after months of mysterious closures—told the NY Post. "It's a different style of pizza. We have lines all the time—people come from all over the world."

True and true: long lines of hangry tourists frequently snake along the blocks where Grimaldi's and Juliana's live. And Spumoni Gardens does specialize in square slices with cheese on the bottom and sauce on top, whereas the other two serve your more standard, coal-fired circle pies.

The Post reports that Spumoni Gardens filed coal oven permits for 46 Old Front Street in April, pausing renovations in May over construction SNAFUs. As such, the opening date has not yet been announced, but it appears this will be Spumoni Gardens' second location. 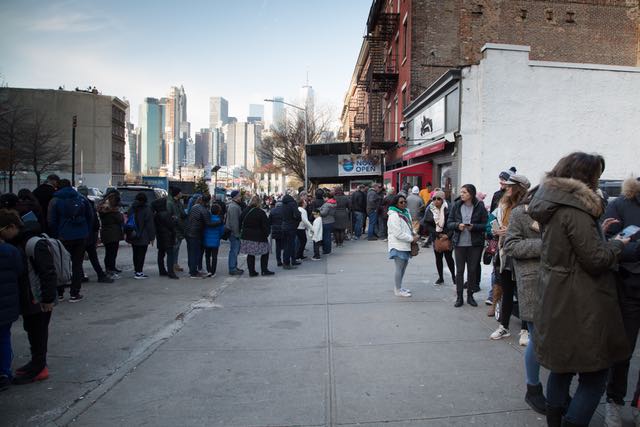 Grimaldi's and Juliana's, though, have longstanding beef that occasionally escalates to lawsuits. Pizza purveyor Patsy Grimaldi founded the original Grimaldi's, at 19 Old Fulton Street, selling it to Frank Ciolli in 1998. In 2011, Ciolli's landlord kicked him out, obligating him to move operations next door. Meanwhile, Grimaldi came out of retirement and reclaimed his old space, opening up a new pizzeria—Juliana's—where his old one had been. Ciolli sued Grimaldi, arguing that having two pizza joints side by side—one of which (ahem, Juliana's) tends to top the other in pizza power rankings—would mean "unfair competition" for his parlor. Ciolli followed that up with a complaint about Patsy Grimaldi's allegedly illegal coal ovens.

Spumoni Gardens has waged its own Pizza Wars, even more aggressively than Grimaldi and Ciollo. In 2011, for example, a Colombo mafioso named Frank Guerra reportedly attacked Eugene Lombardo, of Bonanno crime family-associated spot, The Square in Staten Island, over slices that tasted a little too similar to Spumoni Gardens'. Lombardo's sons, you see, had worked at Spumoni Gardens; the owners of Spumoni Gardens suspected them of lifting the secret sauce recipe and carrying it back to their dad. Lombardo apparently told a private investigator whom Guerra had retained that he knew Spumoni Gardens' owners "weren't happy" with the parity of pizza flavors, and Guerra—a Spumoni Gardens loyalist by marriage—decided they should have a little chat. When Spumoni Gardens co-owner Louis Barbati was murdered outside his home in 2016, investigators initially examined the bad blood between Spumoni Gardens and The Square, along with their respective (and alleged) mob ties.

In any case, Grimaldi's and Juliana's maintain they'll play nice with Spumoni Gardens, which seems advisable because based on the above I think we can speculate with reasonable accuracy about the more likely winner in a fight.

"There's so many good pizza places in Dumbo and New York, so what's one more?" Juliana's co-owner, Matthew Grogan, told the Post. "Bring it on," he added, probably without even a hint of a threat.