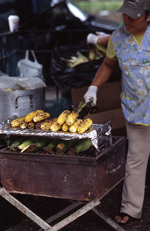 After receiving a dispensation from city officials last month to remain open until the end of their traditional season, the Red Hook Ball Field vendors are serving up their South and Central American and Mexican fare today and tomorrow for the last time this year. Whether they will return next spring is an open question. This summer the Parks Dept. proposed opening bidding for vending concessions at the fields, which would push most of the present vendors from the scene. Offering indigenous Latin American fare at low prices, there is little chance any of the vendors would be able to outbid a better capitalized organization.

Whether the food stalls will return next year is uncertain. The Dept. of Health was closely monitoring the vendors for a time this summer and any very expensive recommendations or a steady stream of fines could put them out of business in short order. Or the Parks Dept. could go ahead with its plan to open bidding up to other concessionaires. The vendors do have the support of Sen. Chuck Schumer, who wrote a letter to the Commissioner of the Dept. of Public Health that forestalled an immediate closing in mid-season. Either way, The Gowanus Lounge points out that next summer, the ball fields and the surrounding neighborhood could be overrun by people going to and from the new Ikea Store on the waterfront and it will be a whole different experience. Make some time tomorrow to get over to Red Hook for a taste of what could be the end of an institution.