If you haven't had a rager at The Woods lately you may be surprised to find some significant changes in the bar's beloved back courtyard. The Williamsburg watering hole has added a second full bar back there and brought in the guys from Landhaus, the popular "farm to sandwich and grilled maple bacon sticks" purveyor that always draws a crowd at Smorgasburg. A full-service kitchen has been built from scratch in the back, and the Landhaus boys say they'll keep kicking out the grub all the way until The Woods' notoriously debauched 4 a.m. weekend closing time.

Landhaus is mostly known for its meat, and there is plenty of that on the menu, including Southern classics like the Landhaus BLT with thick slabs of bacon and baconized mayo; Crispy Duck Drummettes with a Korean chili glaze; and The Ribs glazed pork spareribs with crushed peanuts and cilantro. But vegetarians won't have a problem lining their stomachs; their Jalapeno Cheddar Hush Puppies are fluffy and addictive; the delicious Grilled Corn on the cob with toasted spices, feta, and lime is totally worth getting stuck between your teeth, and there's a Three Cheese Grilled Cheese sandwich with fontina, cheddar and queso americano on she-wolf bakery pullman.

If you like your shrimps, definitely try the Shrimp Boy, a warm and hearty tiger shrimp fritter on a fresh bun with tartar and crisp iceberg lettuce; and there are some fish tacos too, with chipotle crema, pico de gallo and pickled red onions. In short, this is some damn fine bar food, and once they start serving brunch later this summer, you'll have all the sustenance you need to spend an entire day lost in The Woods. They're also making Frozen tiki drinks now, so shit's gonna get crazy. Menu below. 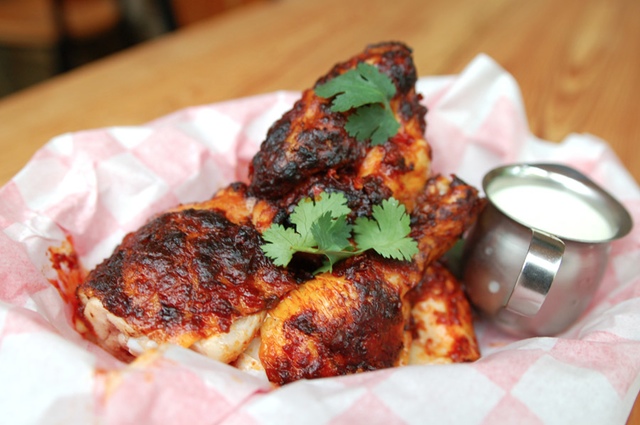 Landhaus at The Woods Opening Menu

#landhaus
#new restaurant and bar radar
#the woods
#williamsburg
#original
Do you know the scoop? Comment below or Send us a Tip