Lady Gaga has been battling nasty innuendo about her weight as well as nasty Staten Island Borough Presidents (okay, just one) but now she and her family have a bigger enemy: The NYC Department of Health.

The singer's parents, Joseph and Cynthia Germanotta, opened up a restaurant, Joanne Trattoria, down the street from Lincoln Center early this year. While the raves weren't there from critics or Yelpers, Gaga herself loves it. But last week, the Department of Health gave it 42 points—equivalent to a "C" grade for infractions such as "Food worker does not use proper utensil to eliminate bare hand contact with food that will not receive adequate additional heat treatment" and "Personal cleanliness inadequate. Outer garment soiled with possible contaminant. Effective hair restraint not worn in an area where food is prepared." 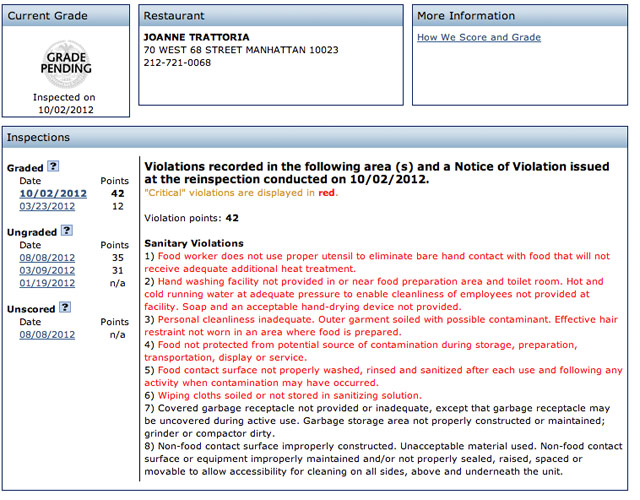 Via NYC Department of Health

The restaurant is allowed to either post a "C" grade or a "Grade Pending" sign and the restaurant's manager tells the Post, "We’re going to be taking it to court. So, it’s bogus until November, when it’s finalized. We’re planning on disputing it."

In the meantime, Lady Gaga has been in Europe—throwing up on stage:

#c grade
#gag
#health department
#joanne trattoria
#lady gaga
#restaurant inspection
Do you know the scoop? Comment below or Send us a Tip