Lady Bunny Stands Up For Chickens 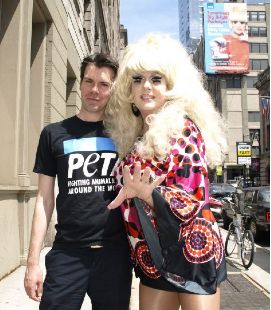 Lady Bunny is the latest to join the ranks of Team PETA, and has unveiled the organization's newest billboard, which features the drag queen (image here). Located at the intersection of Varick and Spring Streets, it encourages people to "kick the bucket" and states that "sometimes big bright packages contain dirty little secrets."

The Lady coyly remarks that she doesn't "quite understand the slogan," but declares that "at least my fat country ass ain't selling KFC!" She also notes that PETA isn't insisting KFC stop serving up buckets of the fried stuff, just that they put an end to "procedures like de-beaking the birds while they are alive."

While the billboard went up earlier this month, PETA tells us "it was officially unveiled yesterday" when Lady Bunny was back in town.