'Ladies Should Be Dressed As Ladies': NYC Restaurants Were Banning Women Who Wore Pants In The 1960s

"Ladies should be dressed as ladies." That was a real reason one restaurateur gave for not allowing women to wear pants while dining there. But this wasn't in, say, the 1800s. This was just around fifty years ago in 1969, many decades after we shed our corsets. Equally shocking, this kind of sentiment was coming from inside New York City. At the time, local restaurants were still banning women who wore pants.

And then things started to change, as little by little, establishments began to better reflect the outside world, and restaurateurs began to (at times begrudgingly) agree that pants were acceptable dining wear for women. Well, some women.

The Algonquin told the NY Times in 1969 that, "It depends on the look of the woman." And the 21 Club told the paper that while pants were not allowed at lunch, "Attractive and flowing evening pants at night if they look like a gown" were acceptable. 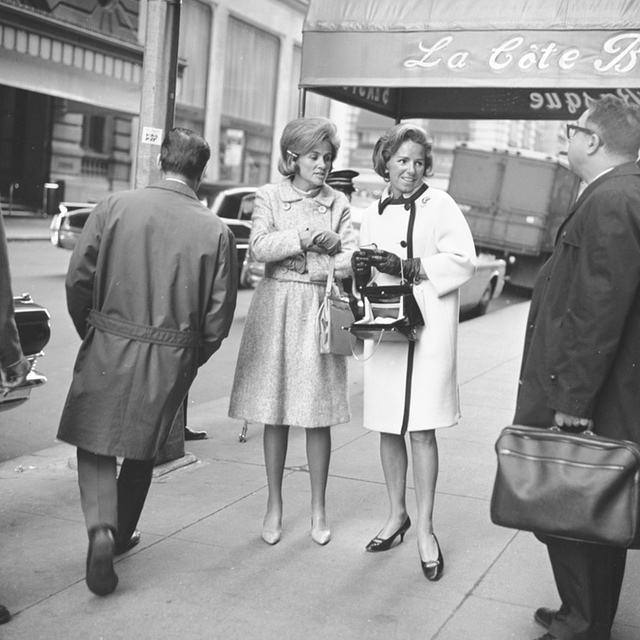 Still, others would not bend on their no-pants policy. La Côte Basque (Capote fans may recognize the name) on East 55th Street declared: "Pants look very nice on some women but they do not belong in a restaurant any more than swimming suits. We will continue our policy: no pants." (That "high-society temple" closed in 2004 after 45 years in business.)

Lafayette on East 50th (another French restaurant of the time, referred to by W magazine as one of "Les Six, the last bastions of grand luxe dining in New York") was also banning pants, saying: "Ladies should be dressed as ladies." They also banned women wearing turtlenecks (proving they did not know women at all).

If these spots haven't closed down by now for other reasons, then their attitudes have surely changed. I checked in with the Algonquin this week, and publicist Kathleen Duffy told me, "I don’t know that we can speak specifically to the quote in the 1969 New York Times article that you have cited, but it’s clear that times have changed, and all women are welcome at The Algonquin, whether they are wearing pants or skirts." Duffy added, "Given the hotel’s rich history and setting, however, we do notice that in general guests tend to dress up a bit to embrace the environment, for drinks at the famous Blue Bar, surrounded by Hirschfeld drawings, or for a leisurely dinner at The Round Table."

Duffy also offered this anecdote about La Côte Basque, saying, "Socialite Nan Kempner [was] denied access to La Côte Basque in 1972 because she was wearing a pantsuit. The story goes that she promptly removed her trousers and entered the restaurant wearing only her top."

#flashback
#history
#pants
#pantsuits
#original
Do you know the scoop? Comment below or Send us a Tip