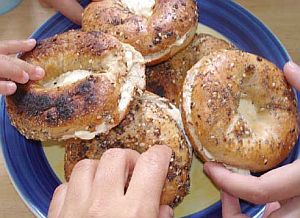 Tired of squandering your mornings laboriously spreading cream cheese on your freshly defrosted bagel? Kraft Foods, Inc. is here to blast you and your breakfast into the 21st century, with their new line of frozen bagels that come pre-filled with cream cheese!

They’re called Bagel-Fuls, and they’re expected to hit stores in April after an “integrated” marketing campaign that’s sure to feature commercials with New York “characters” hailing this new revolution in bageldom, maybe the way Domino's did with Brooklyn Pizza.

Bagel-Fuls (not pictured) will come with cream cheese in regular and cinnamon flavors to start with, but at this point it’s unclear how the bagels will be defrosted, since microwaved cream cheese sounds rather revolting. Smuckers recommends Uncrustables, the frozen peanut butter-and-jelly sandwiches, just defrost for 30-60 minutes before eating.

New Yorkers can be expected to greet the new product with a Bronx cheer at first, but with bagel prices skyrocketing and people just being lazy, the two-in-one combo could soon have them crawling to Kraft. How much would you pay to try Kraft's latest culinary innovation?