Korean fried chicken has been on the radar of Manhattan foodies for quite some time, thanks to Koreatown's Bon Chon. But nowhere else in our fair city has this highly cravable treat spread its wings so rapidly as in Flushing, particularly around Northern Boulevard in the 150s and 160s. The number of restaurants in the nabe serving this delicacy invites comparison to the growth of Starbucks, but in a better, less evil way. There are at least a half-dozen spots, including a branch of Bon Chon. All sport eye-catching logos that emblazon both the walls and the stylish takeout bags, which impart the vibe of having visited a fried-chicken boutique. Given the exquisite taste of Korean fried chicken, we find such highfalutin packaging appropriate.

So popular are these purveyors of tasty poultry and beer that's it's possible to mistake one for another. Which is exactly what happened on the day we set out to eat at Kyochon. We neglected to write down the name. Having recently read about the opening of Kyochon's second U.S. store, we hopped on the 7 to Main Street and strolled down Northern Boulevard salivating with expectation at eating at what some consider to be the chain that first brought Korean fried chicken to the States. Surely there couldn't be more than one new chicken place on the same stretch of Northern Boulevard. So when we came upon Kyedong, with its grand opening sign, we marched right in and ordered some wings half soy-garlic and half spicy. Our order came to the table in a blaze orange pan along with the obligatory side of cubes pickled daikon and a wee bucket to dispose of the bones in. 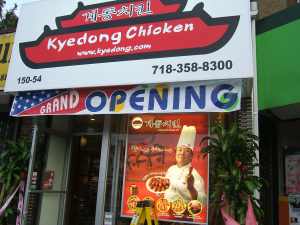 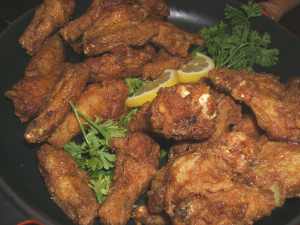 As with most Korean fried chicken, it was juicy, crunchy and not greasy at all. Gothamist has always been surprised by the relative lack of heat in spicy Korean fried chicken, given the incendiary nature of spicy tofu stew. As we downed wing after wing in a dining room decorated with posters of a betoqued Korean chef holding a drumstick with one hand and a platter of same with the other, we were certain that we were eating in the granddaddy of Korean fried chicken restaurants. The only thing missing was an ice-cold beer. Upon leaving, a smug smile crossed our lips as we noticed a KFC across the street.

A few hours later, a glance at the Times food section revealed our error. At first we were upset, but soon we realized that we’d have the chance to consume even more prize poultry. With any luck, Kyochon might even have a liquour license. A week later we ventured once more into the chicken-laden stretch of Northern Boulevard this time with the address in our shirt pocket. 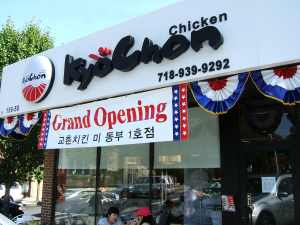 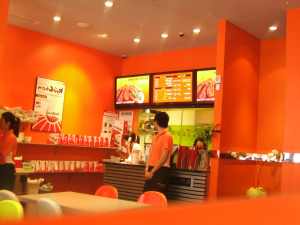 Just as we expected there was a grand opening banner draped across the entrance of Kyochon. We settled into our pastel pink plastic chair in the cheery orange dining room. When we saw that the menu proudly proclaimed fried chicken and beer, we knew were in the right place. An order of half hot and half regular was soon placed and we were told it would take 20 minutes. Ample time to build a monstrous appetite while looking around the dining room at all the happy families and groups of young people enjoying their meals. It also afforded us a chance to take some shots of the restaurant from the vantage point of the highly polished stainless steel rail that runs the length of the room.

Thankfully our order did not take the full 20 minutes, since we were drooling with hunger watching everyone else eat their Kyochon chicken. The wings and drumsticks landed on the table in a wicker basket accompanied by an ice-cold pitcher of beer. One bite of Kyochon’s “Original Series” and we could see why the company feels confident to proclaim “Kyochon represents original Korean-style Premium Chicken!” 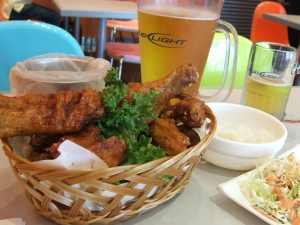 For one thing the drumsticks were super meaty and everything was flavored with soy sauce, garlic and what seemed like a cupboard full of spices. A closer look at the menu revealed that Kyochon has outdone Colonel Sanders: its Standard sauce includes 20 different ingredients. By now you must be wondering what we thought of the hot fried chicken. Let’s just say that there’s a reason for the little chili pepper that appears on the “Hot Series” side of the menu. The hot chicken wasn’t mind-numbingly spicy, but it left a nice warm tingle on the lips, which was easily moderated with cold beer. Now we understand why the menu makes a point of saying “fried chicken and beer”

#As
#chicken
#dining
#eating in
#flushing
#food
#fried chicken
#gothamist
#In the 'Hood
#koreatown
#main street
#manhattan
#northern boulevard
#restaurants
#starbucks
Do you know the scoop? Comment below or Send us a Tip